Jaideep of Patna Pirates is now the best defender in PKL 2018 and the holder of Orange Sleeve. 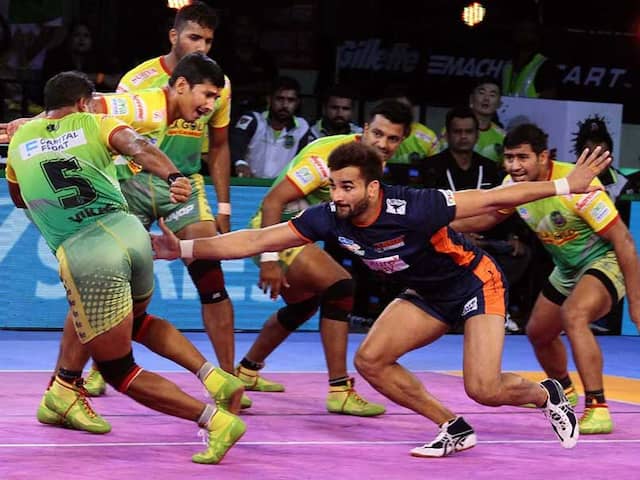 Jaideep is now the best defender in PKL 2018 and the holder of Orange Sleeve.

Patna Pirates were starting the match without their star raider Pardeep Narwal as he was tending his wrist injury while Bengal Warriors were starting without Maninder Singh.

The absence of Pardeep Narwal looked prominent for Patna Pirates as they started to trail by 4 points by the third minute.

It looked like another dismal start by Patna Pirates but was overturned by Tushar Patil who came in as a substitute in the fifth minute for a do-or-die raid and Amit Kumar to start the tally for Patna. They equalised by the eighth minute.

Bengal lost Mahesh Goud and Jang Kun Lee to Patna's defense and thus, a new face came up as the hero as Ran Singh took the raiding in his hands.

He took two bonus points from under the nose of Patna's defense before he got out to a strong thigh hold by Vijay in the 12th minute to concede an all out for Bengal Warriors and make it 9-7.

Both teams then worked on getting the raiders through their defenses as they used do-or-
die raids.

The half ended with Patna Pirates leading Bengal Warriors by 15-12. Both teams continued to work on do-or-die raids as they made empty raids after empty raids. Bengal Warriors reduced the gap to 1 point by the 25th minute as Jang Kun Lee earned the point with his back-kick to make it 16-15.

Patna Pirates increased it back to 4 points by the 27th minute as Manjeet got Mahesh Goud with an ankle hold while Jaideep came with a dash from behind Goud's back to make it 19-15.

The 32nd minute saw Deepak Narwal be saved by the line officials who saw Shrikant Tewthia step out of mat while also being the main defender who stopped Deepak from crossing the mid-line in his 32nd minute raid.

Ran Singh continued to make great works with his raids which could be seen in his 36th minute raid where he would have got six players out if his foot would have crossed the mid-line after being stopped by Jaideep.

Baldev Singh caught a leap frog attempt by Tushar Patil in the 37th minute to creep back towards equalising the score line which they achieved by the 38th minute when Vikas Jaglan got himself out by going out of mat.

This cracker of a match ended with Patna Pirates finishing their home leg with a win by 29-27 against Bengal Warriors.