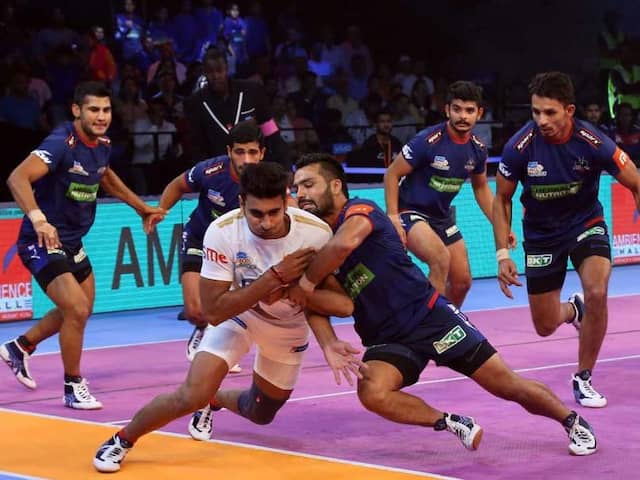 Haryana Steelers ended their home leg in Sonepat with a hard-fought 34-31 win over Dabang Delhi KC in a Pro Kabaddi League match on Thursday. It was an impressive team performance by Haryana as they halted their four-match losing streak. Vikas Kandola came up with crucial raids and got able support from Monu Goyat and Naveen Kumar. Dabang Delhi failed to capitalize on opportunities. Their star man Meraj Sheykh had a disappointing match, scoring just two points. In the other match of the night, Gujarat Fortunegiants defeated Puneri Paltan 34-28 in their own backyard. Ajay Kumar, who came on a substitute was the hero for Gujarat, scoring six crucial points. Sachin Tawar produced an all-round performance scoring 12 points for the visitors. The home team were let down by their defence as they scored just seven tackle points. Out of the seven, six were scored by Girish Erna, who didn't get much support.

Earlier, Monu Goyat got Haryana to a flying start as he scored three points in the first minute to give them a 3-1 lead. Pawan Kadian made a successful raid in the third minute as Dabang Delhi KC trailed 2-4. Haryana Steelers' defence did a fine job as they led for the majority of the first half.

Dabang Delhi forced another super tackle at the start of the second half and led 19-15 after 25 minutes. Haryana Steelers responded with a super tackle of their own as they cut the lead to two points.

Haryana Steelers led 30-25 with less than five minutes to go. Chandran Ranjit scored with a crucial two-point raid as Dabang Delhi trailed 28-32 in the 38th minute. Haryana Steelers kept their nerve in the last two minutes of the match and registered a much-needed victory.