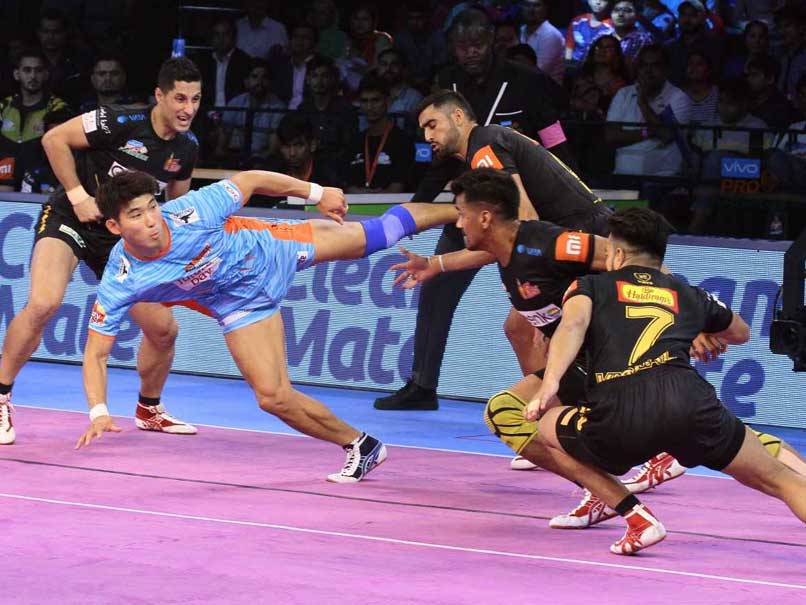 Bengal Warriors registered their second consecutive victory in the Pro Kabaddi Season 6, beating Telugu Titans 30-25 in a thrilling encounter here on Tuesday. Maninder Singh was in fine raiding form for the Warriors, scoring 11 points to lead his team to victory. It was a disappointing night for Telugu Titans as they squandered many opportunities before tasting their first defeat in the ongoing tournament. Rahul Chaudhari had a match to forget as he could score just two tackle points and made a costly error in the last minute. The Telugu defence scored more points than their raiders in the match. In the second match of the day, Haryana Steelers failed to complete a comeback as the Pink Panthers registered their first win of the current season and their first win over the Steelers across the seasons. The Panthers ended winners by a meagre 3 points ahead 36-33. A solid all-round performance by Nitin Rawal aided by Anup Kumar's crucial tackle points allowed Jaipur to register a much-needed win.

Despite the loss, Telugu Titans retained their top spot in Zone B whereas Bengal Warriors climbed to the third position.

In a low-scoring first half, it was the Telugu Titans defence that stood out the most with Abozar Mighani leading them. The match began with Telugu Titans taking a swift 2-0 lead with Nilesh Salunke scoring a raid point.

Bengal Warriors opened their account in the third minute with a tackle point. Jang Kun Lee scored his first raid point as Bengal Warriors led 5-4 in the fifth minute.

Both teams traded raid and tackle points in the next couple of minutes as it was 9-9 after 14 minutes. At the end of the first half, Telugu Titans held a slender three-point advantage as they led 13-10.

The second half followed a similar pattern till the 32nd minute when Maninder scored with a two-point raid as Bengal Warriors inflicted an all out to lead 19-17.

Rahul had an extremely quiet game as he was sent to the bench once again by the Warriors' defence in the 33rd minute.

The match was evenly poised with Bengal Warriors holding a two-point lead after 34 minutes. The Bengal defence was on the top of their game as
they made three crucial tackle points in the last five minutes.

With less than three minutes to go Bengal looked on course to a win with a 26-21 lead.

However, the Telugu defence sent Maninder back to the bench in the 39th minute as they trailed 25-27 but towards the end, Rahul missed a golden opportunity to get his side back in the game as his critical error gave Bengal Warriors two crucial points to pocket the contest.

In Wednesday's matches, Bengaluru Bulls will play Tamil Thalaivas while U Mumba will take on hosts Haryana Steelers.