Pro Kabaddi: With this win, Bengaluru Bulls strengthened their position in the top-four of the points table. Jaipur Pink Panthers are currently 7th on the points table while Telugu Titans are on 11th position. 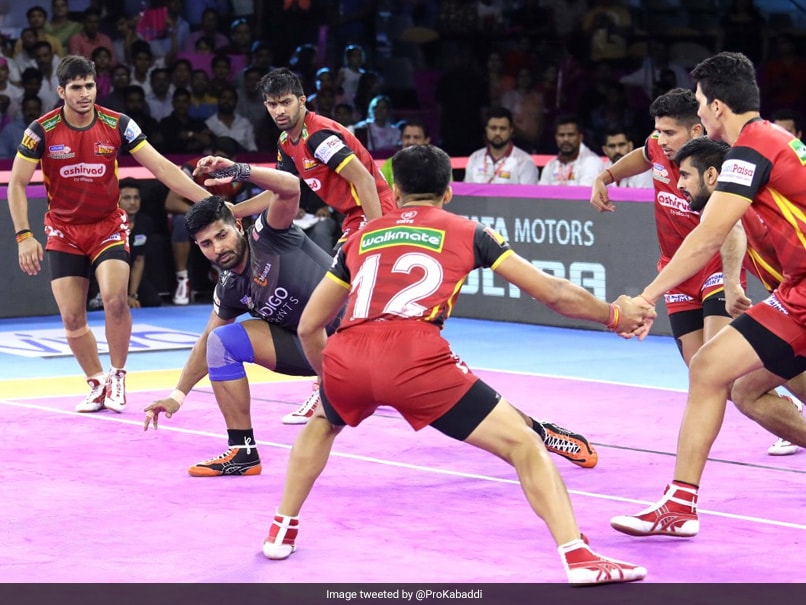 Defending champions Bengaluru Bulls, riding on Pawan Sehrawat's raiding brilliance, defeated U Mumbai 35-33 in a Pro Kabaddi League season 7 match at Jaipur's Sawai Mansingh Stadium on Friday. U Mumba's Abhishek Singh and Athul MS impressed with a Super 10 and nine points respectively but couldn't help their side cross the line. Unlike the first game, the second match was a pretty one-sided affair as Telugu Titans decimated hosts Jaipur Pink Panthers 51-31. Siddharth Desai was the star performer for the Titans with 22 points (18 raids, four bonus). Deepak Niwas Hooda with 12 points was the only positive for the Jaipur side.

In the first game, raiders from both teams did their job perfectly but Bengaluru defender Saurabh Nandal notched-up a high-five which proved to be the difference between the two sides. Bengaluru picked up 10 points in defence whereas U Mumba players could only reek seven points in defence.

Titans' Desai got ample support from his raiding partner Rajnish Dalal who also secured a Super 10. He scored up 11 points in the match.

Jaipur's Deepak Niwas Hooda, on the other hand, didn't get enough support from his players. His raiding partners Nilesh Salunke and Deepak Narwal could only manage to claim nine points -- two less than what Dalal scored for Titans.

With this win, Bengaluru Bulls strengthened their position in the top-four of the points table. Bulls have 58 points from 19 games, while U Mumba are just a place below them at 5th position with 54 points.

Despite the loss, Jaipur Pink Panthers are still in a better position than Telugu Titans who have almost relinquished their chances of qualifying for the playoffs.

Jaipur are currently seventh on the points  table while Telugu Titans are on 11th position in the 12-team points table.