U Mumba wrapped up their home leg with a 12-point win against season six finalists Gujarat Fortunegiants. 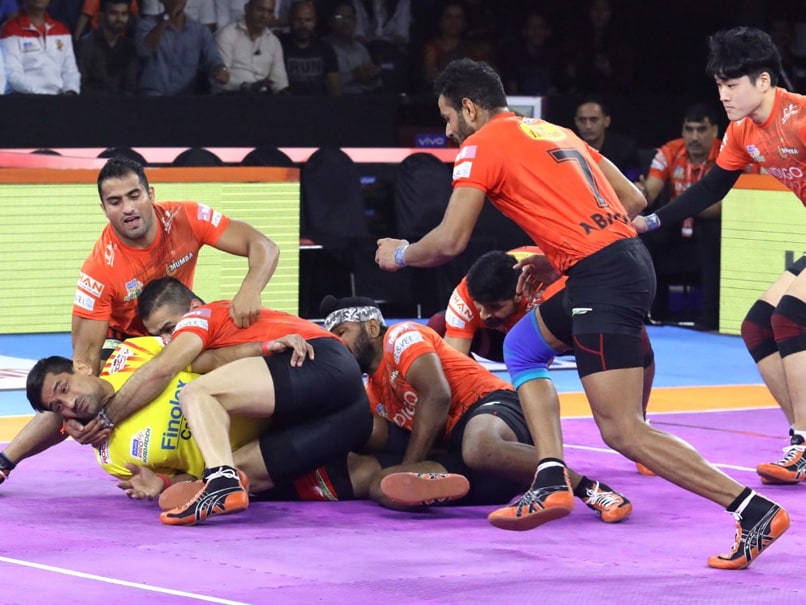 In what could be an edge-of-the-seat clash, a technical point decided the fate of the match between Telugu Titans and UP Yoddha as they played out a 20-20 tie in Pro Kabaddi League (PKL) season seven clash in Mumbai on Friday. It was low-scoring yet a thrilling contest where the two defences rose to the occasion. Siddharth Desai top scored for Telugu Titans with 5 raid points. Abozar Mighani scored four tackle points. In the other match, U Mumba wrapped up their home leg with a 12-point win against season six finalists Gujarat Fortunegiants.

The defensive duo of Nitesh Kumar and Amit combined, scored 8 tackle points for UP Yoddha. Both teams' star raiders opened their accounts in the first minute as Siddharth and Monu Goyat made successful raids. Telugu Titans opened up a three-point gap after five minutes to lead 5-2.

UP clawed their way back to level the match at 7-7.

Amit put in a terrific strong tackle as UP trailed 9-11. Shrikant Jadhav completed a do-or-die in the 20th minute as UP levelled the match at 11-11 at the end of the first half. It was the Desai brothers that did the bulk of the scoring for Titans in the first half as they combined scored seven raid points.

The second half saw both teams starting a bit cagily as they traded raided and tackle points. After 29 minutes, the score was level at 14 points apiece. The match was a fine example of how tough the league has become and the defensive units of teams have become stronger.

Raiders from both UP and Telugu Titans were kept quiet by both the defences. It came to two critical do-or-die raids and while Siddharth made a successful one, Monu failed to do so.

With less than five minutes to go, Telugu Titans led 18-15. UP first forced a super tackle and then got a raid point to level the match at 18-18 in the 36th minute.

With less than two minutes to go, both teams were level at 19-19 and it looked like the match was heading for a tie. It looked like Siddharth had won the match for the Titans but his teammates rushed to the court which led to UP being awarded a technical point, ending the match with a tie at 20-20.