PKL 7: Dabang Delhi Edge Past Tamil Thalaivas In A Thriller

Naveen was the star of the show for Dabang Delhi with seven raid points and a crucial tackle point. 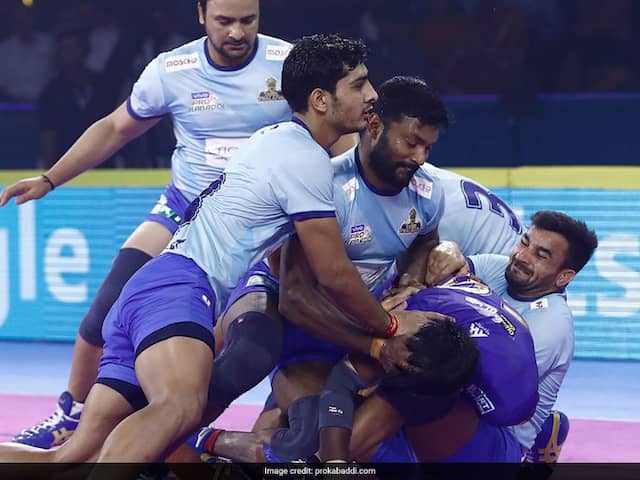 Dabang Dehi defeated Tamil Thalaivas in a close encounter on Thursday at the Gachibowli Indorr Stadium in Hyderabad. Naveen starred for Delhi as he clinched seven raid points along with a tackle point to help Delhi edge past Tamil Thalaivas 30-29. Tamil Thalaivas took an early lead in the match but Delhi's skipper Meraj Sheykh managed to overcome the deficit and register an important victory. For Tamil Thalaivas, captain Ajay Thakur and Vishal Mane gave their side the initial lead with two touch points. "Showman" Rahul Chaudhari soon followed suit with a touch point of his own and the defence also contributed with three tackle points as Tamil Thalaivas raced to a 5-1 lead.

With Dabang Delhi reduced to just two men on the mat, captain Joginder Narwal's Super Tackle on Chaudhari brought them level at 5-5.

Tamil Thalaivas, however, went on to dominate the following few minutes and inflicted the first All Out of the match on Dabang Delhi in the 11th minute, with Ran Singh putting in a well-timed tackle on Meraj Sheykh.

Naveen tried his best to keep Dabang Delhi in touching distance, scoring three raid points before the half-time whistle, but Chaudhari matched the youngster's tally with three more raid points of his own. With 'Iceman' Thakur and the defence picking up points too, the two teams went into the break with Tamil Thalaivas having an 18-11 lead.

The second half saw Dabang Delhi try and take the initiative as they cut down the deficit to just 3 points, riding on a stellar all-round display by Sheykh. With the scoreline reading 20-17 and Tamil Thalaivas reduced to just two men on the mat, a crucial Toe Touch by V Ajith Kumar on Ravinder Pahal helped his team avoid a potential All Out. Ajay Thakur and Co. then looked to make the most of the let-off as they recovered their seven-point lead with just seven minutes left on the clock.

However, the tide of the match turned with three minutes to go. With Naveen raiding, two Tamil Thalaivas defenders ended up out of bounds while the raider got a touch point on Ajeet to register a three-point raid.

In the subsequent raid, Vishal Mane Blocked Thakur to subject Tamil Thalaivas to an All Out. With momentum on his side, Naveen scored a raid point and a tackle to bring the scores level at 29-29.

Naveen came in for the buzzer raid and Tamil Thalaivas managed to tackle the youngster down, but not before Manjeet Chhillar had stepped out of the mat before the point of contact. The point went Dabang Delhi's way as they edged out Tamil Thalaivas to register a dramatic win.