Sponsors reluctant to air television commercials featuring the Kerala pacer, who is being investigated for his role in fixing matches during the Indian Premier League 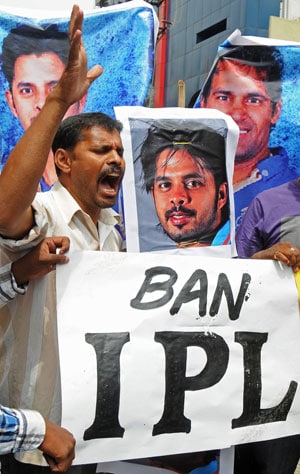 After he was dropped from an advertisement for the state run Kerala lottery, Sreesanth is getting the 'axe' from television commercials of sponsors associated with the Rajasthan Royals team.

According to media reports, a water purifier company, associated with the Royals, has taken off a TV advertisement featuring Sreesanth, who is being investigated for spotfixing along with three other Rajasthan teammates.

According to a report, the Delhi-based Kent R-O Systems, has pulled out commercials featuring Sreesanth. The company, however, will continue to sponsor the IPL franchise, Rajasthan Royals.

"We have taken down the ads with immediate effect since they feature Sreesanth in them. For now, we are just taking off air the ads with players whose names have come up," Mahesh Gupta, chairman and managing director, Kent R-O Systems, told The Hindu.

"It is just three people who have been named. We have a very respected captain (Rahul Dravid), who also expressed his shock. At the moment nothing has been said about the management or the team as whole being involved, I don't think team should suffer because of certain individuals," said Gupta.

Another Rajasthan Royals sponsor, Supertech Cement, has stood by the franchise. Watch: Preity Zinta on spotfixing

In a statement, RK Arora, the Supertech chairman, said, "It is only three players in individual capacity who have been caught in wrongdoing. The team still stands untouched and it is playing very well and in a professional manner. We have no intention at present to review our sponsorship and have full faith in the franchise. We will continue our support for Rajasthan Royals."

A couple of other associate sponsors like Tata Consultancy Services and Tata are adopting a wait-and-watch approach as Delhi Police investigates the Royals players.

Comments
Topics mentioned in this article
Cricket Rahul Dravid IPL 2013 Sreesanth Rajasthan Royals Kings XI Punjab Indian Premier League 2011
Get the latest updates on ICC T20 Worldcup 2022 and CWG 2022 check out the Schedule, Live Score and Medals Tally. Like us on Facebook or follow us on Twitter for more sports updates. You can also download the NDTV Cricket app for Android or iOS.