The probe is expected to center on the UCI's handling of doping in the late 1990s and early 2000s, especially its links with Lance Armstrong. Much could hinge on whether Armstrong and former UCI presidents Hein Verbrugggen and Pat McQuaid agree to testify. A three-man independent panel will investigate cycling's doping past, including allegations the sport's governing body colluded with Lance Armstrong.

UCI president Brian Cookson said Wednesday the commission will investigate allegations "that the UCI has been involved in wrongdoing in the past - allegations which have done so much to hurt the credibility of the UCI and our sport."

The probe is expected to center on the UCI's handling of doping in the late 1990s and early 2000s, especially its links with Armstrong. Much could hinge on whether Armstrong and former UCI presidents Hein Verbrugggen and Pat McQuaid agree to testify.

The UCI and Verbruggen have been accused of protecting Armstrong and helping cover up his doping. The American was stripped of his seven Tour de France titles and banned from Olympic sports for life after admitting to doping.

The investigative panel will be based in Lausanne, Switzerland, and will be called the Cycling Independent Reform Commission. Cookson said he wants the investigation completed this year.

The commission will be chaired by Dick Marty, a Swiss politician and former Swiss state prosecutor. The other members are German anti-doping expert Ulrich Haas and Peter Nicholson, a former Australian military officer and war crimes investigator.

"Their work will also be focused on understanding what went so wrong in our sport and they will make recommendations for change so that as far as possible those mistakes are not repeated," Cookson said in a statement.

In an interview published by Britain's Daily Mail in November, Armstrong said Verbruggen helped him cover up doping at the 1999 Tour de France. Verbruggen dismissed it as a "ridiculous story."

Armstrong said Verbruggen insisted "we've got to come up with something" to explain his positive tests for a banned corticosteroid. The UCI accepted Armstrong's backdated prescription for a cream to treat saddle sores, allowing him to stay in the race. He went on to win the first of his seven Tours.

The UCI panel is also expected to investigate whether $125,000 donated by Armstrong was paid to cover up suspicious doping tests.

Creation of the panel was one of the main campaign pledges of Cookson, a Briton who unseated Ireland's McQuaid in the UCI presidential election in October.

Cookson said the panel will have complete access to UCI files and electronic data that was seized by investigators within minutes of his election. 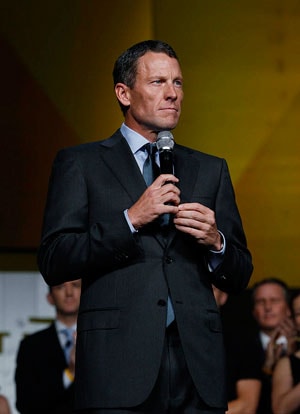 The panel will seek testimony from current and past riders and officials. The UCI is working with the World Anti-Doping Agency on what type of incentives to offer witnesses in exchange for their cooperation.

Cookson has said Armstrong would be among those invited to testify before the UCI panel, as well as Verbruggen and McQuaid.

Armstrong has said he would cooperate with any international commission on cycling's doping past. He is seeking a reduction in his life ban.

Armstrong has so far refused to provide sworn testimony to the U.S. Anti-Doping Agency. It was USADA's detailed report in 2012 of drug use by Armstrong's U.S. Postal Service team that led to him being stripped of the Tour championships he won from 1999 to 2005.

USADA has said the only chance to lessen the penalty is to answer questions under oath.

Armstrong said on Twitter on Tuesday that "my position remains unchanged" and he plans on "cooperating openly & honestly" with any UCI commission that contacts him.

He tweeted that "I can also confirm that neither myself nor anyone on my team has been contacted by the UCI or the independent commission."

Cookson said the UCI will cover the full budget of the commission, which will operate "completely independently of the UCI" and receive no instructions from the body.

Haas, a German professor of law at the University of Zurich, is an experienced judge at the Court of Arbitration for Sport who has been involved in prominent cycling cases.

Haas was the chosen arbitrator of Alberto Contador's legal team on the three-man panel which eventually stripped the Spanish rider of his 2010 Tour de France victory and banned him for two years. The panel decided that Contador's positive test for clenbuterol was caused by a contaminated supplement.

Comments
Topics mentioned in this article
Cricket India Cricket Team Indian Premier League 2011 MS Dhoni Cycling
Get the latest updates on ICC Women's Cricket World Cup 2022 and IPL 2022, check out the Schedule , Live Score and IPL Points Table. Like us on Facebook or follow us on Twitter for more sports updates. You can also download the NDTV Cricket app for Android or iOS.