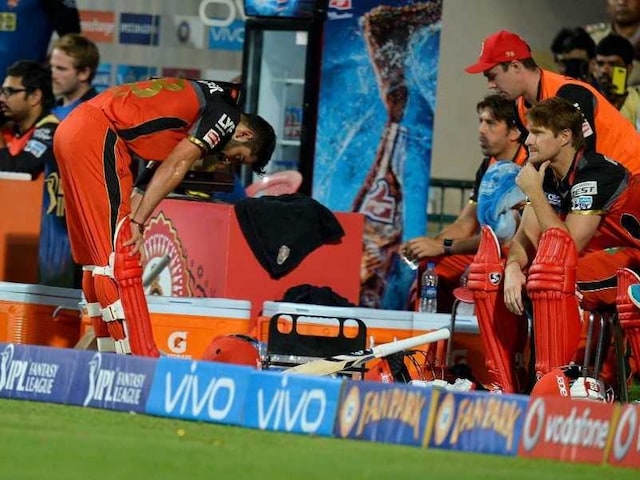 Royal Challengers Bangalore captain Virat Kohli (left) returned to the dug out distraught after being dismissed by Sunrisers Hyderabad pacer Barinder Sran in the IPL final on Sunday.© AFP

Virat Kohli's Royal Challengers Bangalore were in rampaging form heading into the IPL 2016 playoffs. RCB were the first to storm into Sunday's final and given the team's new-found confidence, Sunrisers Hyderabad were considered the underdogs.

At RCB's ground at Chinnaswamy, the script unfolded a lot differently. Kohli's stunning form made him an emotional favourite. India rooted for him perhaps because they didn't want an Australian captain to take the cake.

But David Warner ensured he was not letting Kohli steal his thunder. NDTV expert Sunil Gavaskar feels how hurt Kohli was after the heart-breaking eight-run loss, the third time RCB have lost a final.

"Virat has done everything as a batsman as a captain, but that little bit extra which would have given him the Cup wasn't to be," Gavaskar said, explaining how cruel cricket can be to the best of superstars.

A surprising decision by David Warner

The gritty Warner won the toss and backed Sunrisers Hyderabad to put a score on the board. It was quite a surprising decision because Hyderabad's strength was their seam bowling.

Warner led from the front with a breezy 38-ball 69. Another Aussie - Ben Cutting - smashed a cameo (15-ball 39 not out) to score what perhaps was the most crucial innings of the IPL final.

The match seemed to be in RCB's pocket once Chris Gayle started plundering runs at will. Gayle (38-ball 76) was first out (114/1 in the 11th over) but Kohli was in control till he was bowled by Barinder Sran for 56.

The world came crashing down for RCB as the spotlight turned on Warner's modest team that created a piece of IPL history.

Kohli was distraught. He had reasons to be. India's young Test captain, who scored a record four centuries this IPL, had clearly put team before self.

Kohli needed 81 runs to become the first man to score a 1,000 runs in a single IPL season. But he let Gayle do the scoring and was happy to play second fiddle. Kohli ended with 973 runs, a benchmark which will be hard to emulate. Warner was second best with 848. De Villiers was third with 687.

Gavaskar's heart went out to Kohli, who led with a lot of intensity and passion.

"Virat would have learnt a lot as a batsman, as a captain...it's a big step forward for him. Don't be surprised if RCB win the trophy sooner than later," said Gavaskar.

Kohli did take the defeat in stride and lavished praise on Warner and his team. An aggressive, man who wants to lead the life of a monk, has indeed come a long way.

Comments
Topics mentioned in this article
Royal Challengers Bangalore Sunrisers Hyderabad Virat Kohli Sunil Manohar Gavaskar IPL 9 Cricket
Get the latest Cricket news, check out the India cricket schedule, Cricket live score . Like us on Facebook or follow us on Twitter for more sports updates. You can also download the NDTV Cricket app for Android or iOS.