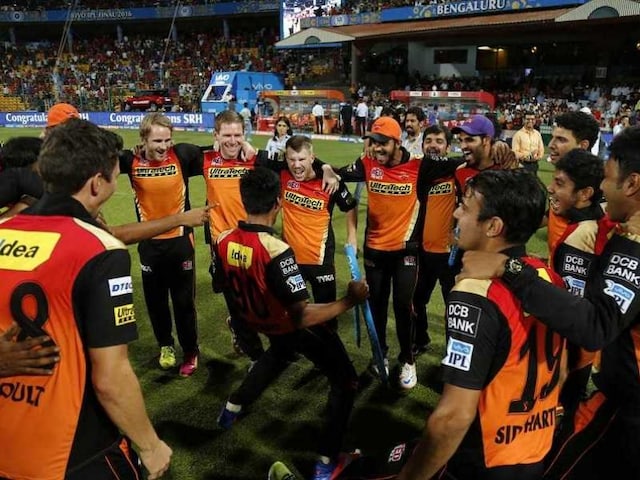 Sunrisers Hyderabad pacer Mustafizur Rahman (centre) shows off his dance moves as his teammates cheer him on following his SRH's win over Royal Challengers Bangalore in the IPL final on Sunday.© BCCI

"When a team wins three matches in five days, it deserves to be champions," said Sunil Gavaskar. Sunrisers Hyderabad stunned Royal Challengers Bangalore by eight runs to win their maiden IPL crown. For Virat Kohli's RCB, it was their third defeat in a final.

Sunrisers Hyderabad eliminated Kolkata Knight Riders on May 25 and then in a virtual semifinal, got the better of Gujarat Lions to set up a final showdown with favourites Royal Challengers Bangalore on Sunday.

David Warner's team completed a fairytale run with the skipper himself leading the way in all three playoff games.

"It was a team effort for Sunrisers. Don't forget the batsmen got 200 runs and if SRH didn't get that score and put pressure on the asking rate for RCB, they wouldn't have won the match," Gavaskar told NDTV, adding: "If Chris Gayle did not play that innings (38-ball 76), RCB wouldn't have gone that far."

Gavaskar agreed with another NDTV expert Aakash Chopra's view that "left is the new right". The former Test opener and IPL commentator said it was nice to see "left-handers" doing well in IPL.

"The way Warner batted and how Mustafizur Rahman bowled, it was a great too see left-handers doing well...and Ashish Nehra (just had a surgery) will be celebrating in London," Gavaskar said.

"The way Warner backed his bowlers, it was creditable. The way Ben Cutting and Moises Henriques bowled during the closing stages, it was decisive. And to get Mustafizur fit to play the final, only goes to show how much Warner trusted his bowlers," explained Gavaskar.

Gavaskar lauded SRH's ability to withstand the pressure of travel and playing conditions en route to the championship title.

"The champions have won three matches in five days. That takes some doing. With the travel involved, that is never easy. You have to say that RCB were the favourites but Hyderabad were the deserving champions."

"They really lifted Bhuvneshwar Kumar's morale so much so that he ended up as the highest wicket-taker," Chopra said, underlying how SRH combined perfectly as a team.