Chasing a target of 163, Sunrisers Hyderabad lost wickets at regular intervals but a masterful knock from skipper David Warner backed up by a breezy 27* from Bipul Sharma guided them to their maiden Indian Premier League final, where they'll face Royal Challengers Bangalore. 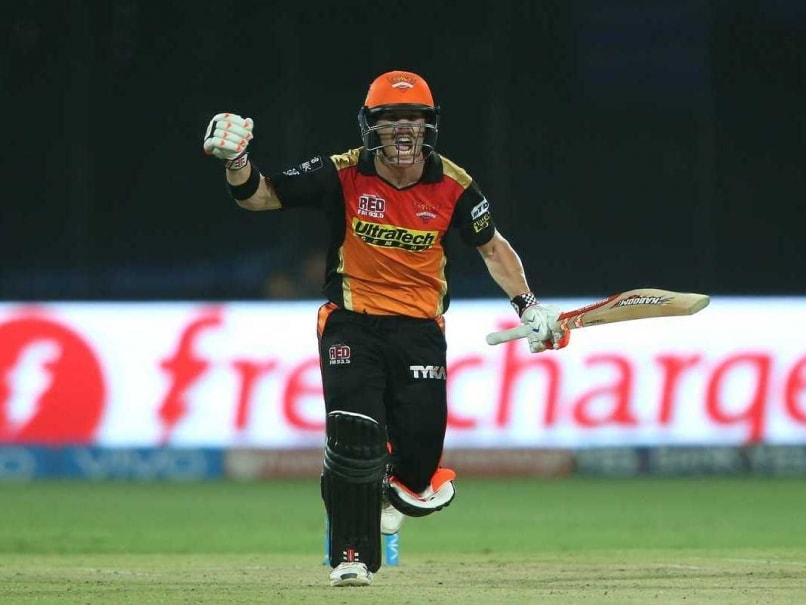 David Warner slammed his eight fifty of the season to guide Sunrisers Hyderabad to their maiden IPL final. © BCCI

Skipper David Warner produced a majestic 93 as he single-handedly led Sunrisers Hyderabad into the IPL final after securing a four-wicket win over Gujarat Lions in the Qualifier 2, on Friday.

Chasing a tricky 163, Sunrisers overhauled the target with four balls to spare as Warner anchored the chase with his responsible 58-ball knock, embellished with 11 four and three sixes.

Sunrisers Hyderabad will now challenge Royal Challengers Bangalore on Sunday, as the two teams will compete for their first ever IPL title.

Wickets kept tumbling but Warner had dug his heels and found amazing support in Bipul Sharma, who came up with a sizzling unbeaten 27-run knock under pressure.

Bipul, who had also troubled rival batsmen when Lions batted, took pressure off his captain with his timely big shots. His sixes off Praveen Kumar and Dhawal Kulkarni played a crucial role in turning the tide in Sunrisers' favour.

Bipul, who played for India A in 2010, always had batting credentials but on Friday it was the time to show his worth as he added 33 runs with Warner in their unfinished partnership for the seventh wicket.

Needing five runs off last over, Warner blasted a four on the first ball off Praveen Kumar to level the scores and then took a single to finish the match comfortably.

Earlier, Aaron Finch (50) rescued his side with a fighting half-century, leading Gujarat to a competitive 162 for seven with useful contribution from Brendon McCullum (32), Dinesh Karthik (26) and Dwayne Bravo (20).

Losing Shikhar Dhawan (0) and Moises Henriques (11) early was not the ideal start for the Sunrisers. Dhawan was run out while Henriques hit straight to Eklavya Dwivedi in the covers off Dwayne Smith.

Warner was still there and giving him company was a confident-looking Yuvraj Singh as the Sunrisers managed 46 for 2 in Powerplay overs.

Sensing that spinners would do well, Lions skipper Suresh Raina introduced himself early into the attack and also handed the ball to young Shivil Kaushik.

Warner hammered Raina for a straight six, that broke the glass facade on the first tier, to bring up team's fifty and found another boundary of a mis-field from the substitute fielder Andrew Tye.

After giving away only three runs in his first over, Kaushik sent back Yuvraj in his second over and gave away only one run.

The young spinner with his bizarre action kept troubling the Sunrisers batsmen, hardly giving a loose ball as he kept hitting the right length. He gave away only 13 runs in his three overs.

Warner reached his fifty with an edge off Kaushik. In a team score of 82 in 12 overs, Warner had contributed 50. Kaushik came back to complete his four-over spell and saw the back off Ben Cutting (8), leaving Sunrisers reeling at 84-5.

The Australian southpaw hit Smith for a six and a four and Naman Ojha too smashed one shot over the ropes as Sunrisers amassed 19 runs in the 15th over.

From thereon, it was Bipul's show as he gelled with his captain to eke out a memorable win.

Earlier, Finch added 51 runs in just 4.5 overs with Ravindra Jadeja (19 not out) when Lions were gasping at 83 for five after being invited to bat on a decent batting track at Feroze Shah Kotla ground.

Finch, who enjoyed one life, took 32 balls for his 50-run knock that had seven fours and two sixes. Brendon McCullum contributed a 29-ball 32 while Dwayne Bravo played a useful 20-run cameo towards the end.

Sunrisers bowlers did a superb job but they missed Mustafizur Rahman, who sat out due to a niggle, in the death overs. His replacement Trent Boult was clearly rusty, bowling a lot of full tosses. The Kiwi conceded 39 runs in his four overs.

Warner smartly used his bowlers, who had control over the proceedings for the most part of the contest. Bhuvneshwar Kumar gave away 27 runs in four overs and took two wickets while Ben Cutting (2\20) also scalped two batsmen.

Eklavya Dwivedi (5), who had hit some lusty blows in Qualifier 1 while batting down the order, was promoted to open today but he could not do much, getting dismissed in the first over off Bhuvneshwar.

Boult, who played in place of Rahman, soon made his presence felt by trapping rival captain Suresh Raina, who played across and was caught in front of the wicket. As expected, the Sunrisers pacers had made an impact in the Powerplay overs, conceding only 38 runs but the good thing for the Lions was that McCullum was still there.

The Kiwi batsman looked in good touch and easily dispatched a few bad balls to the boundary ropes. Dinesh Karthik (26) also looked solid and managed to stabilize the innings. They did not dominate the bowling but ensured that Lions have a platform where they could go for the kill.

Bipul Sharma created a chance to break the partnership but Cutting mis-timed the jump to take the catch offered by Karthik. Worse, the ball went for a six after slipping through the hands of the fielder.

However, Karthik could not cash on the life and was run out needlessly after a miscommunication with McCullum.

Finch pressed the accelerator pedal straightaway, hitting Barinder Sran for a four and a six after his side was 67 for three at half-way mark. Bipul created another chance off his bowling but this time Sran dropped Finch.

However, the left-arm spinner finally got the wicket when McCullum hit one straight to Bhuvneshwar two balls later.

Cutting added to the Lions misery by removing Smith who cut straight to Shikhar Dhawan. The Lions were now reeling at 83 for five in 13 overs.

Lions never found the scoring easy but thanks to Finch, Jadeja and Bravo they had something to fight for.