Once looked upon as an emerging star, Jharkhand's Saurabh Tiwary, now nearly unrecognisable, made a strokeful 57 off 45 balls against Mumbai Indians, albeit in vain, for Rising Pune Supergiants on Sunday 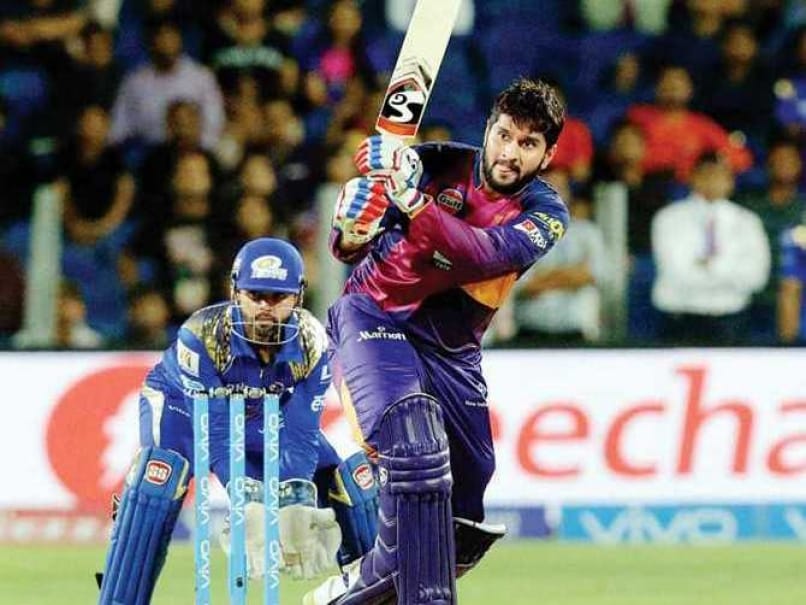 Rising Pune SupergiantsÂ Saurabh Tiwary smashes one on the leg side as Mumbai Indians Âkeeper Parthiv Patel looks on during their IPL match at PuneÂs MCA Stadium on Sunday.© PTI
Pune:

Rising Pune Supergiants find themselves in a not-so-great position after eight games of the IPL 2016. They have won two away games, and have lost the remaining six, including all four at home.

To make matters worse, they have lost their top batsmen - Kevin Pietersen, Faf du Plessis, Mitchell Marsh and Steve Smith - to injuries. And there is quite a realistic chance that they might have only three genuine batsmen, followed by four all-rounders, for the game against Delhi Daredevils, unless Usman Khawaja arrives in time for the May 5 game.

In that sense, the Supergiants' team management must have felt somewhat relieved by Saurabh Tiwary's half-century against the Mumbai Indians on Sunday.

Once, a Dhoni clone

The left-handed batsman, once looked upon as a future star, hasn't had particularly great IPL seasons in the last few years. And he was obviously not a first choice player for a batting unit full of big stars. He only got a look in after Kevin Pietersen was ruled out, and was promoted to open after Du Plessis joined Pietersen in the casualty list.

One look at this powerful striker from Jharkhand, and one wonders how he fits in the scheme of things for a T20 franchise, where fitness and quickness of a player matter the most.

Tiwary clearly looks overweight, has struggled to get down in time to stop powerfully-hit shots at the boundary line and hasn't often looked ready to run quick singles, with someone like Ajinkya Rahane or Steve Smith at the other end.

There is nothing to take away from his useful fifty against the Mumbai Indians on Sunday though. After struggling initially, he struck some powerful blows, starting with two sixes off Krunal Pandya's left-arm spin.

"I was opening the batting in IPL after almost two years, so it took me some time to get used to the conditions. Once I got set, I thought I was feeling quite well with the manner in which I was batting. Obviously, when you score runs, you feel confident, so I am feeling good with my batting," Tiwary said about his knock.

Opening the batting, Tiwary batted till the 18th over, helping the Supergiants to a decent but below par score. The left-hander though, slowed down considerably after Smith's dismissal in the 10th over.

"When Smith and I were batting together, we were scoring at a healthy run rate, but once he got out, the wicket slowed down a bit so we couldn't accelerate in the middle. And they bowled exceptionally well in the death overs," Tiwary said

about Supergiants scoring only 67 runs off 64 balls after Smith was out.

With Tiwary and Rahane being the only genuine Indian batsmen in the Supergiants' set up, the left-hander is likely to get a long rope this season.

(This story has not been edited by NDTV staff and is auto-generated from a syndicated feed.)
Comments
Topics mentioned in this article
Mumbai Indians Rising Pune Supergiants JHA Saurabh Tiwary IPL 9 Cricket
Get the latest updates on IPL 2021, IPL Points Table , IPL Schedule 2021 , live score . Like us on Facebook or follow us on Twitter for more sports updates. You can also download the NDTV Cricket app for Android or iOS.