Aaron Finch's unbeaten knock of 67 guided the Indian Premier League debutants Gujarat Lions to their third successive victory. The Lions defeated the Mumbai Indians by three wickets on the last ball of the match. 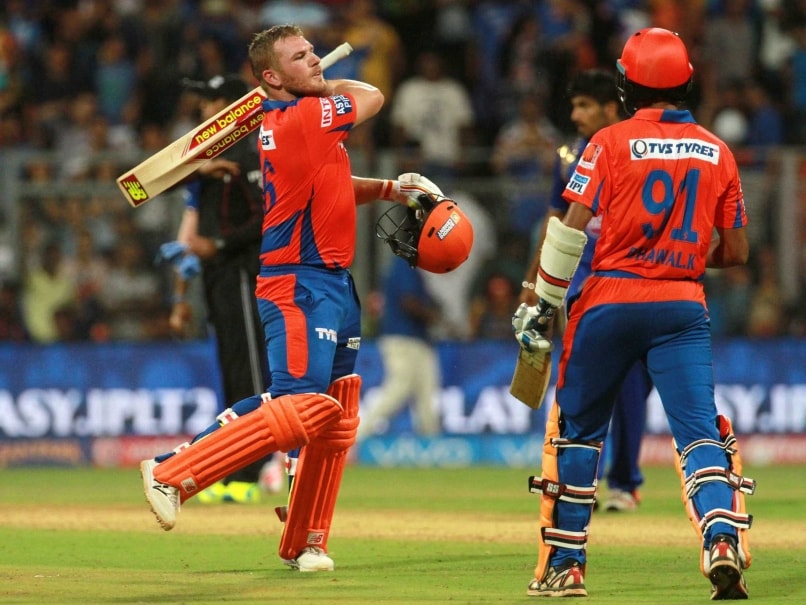 T20 expert Finch (67 not out) played the sheet-anchor's role as he batted through the innings to hit his third half century on the trot as tournament debutants Gujarat Lions notched up their third straight victory to remain on top of the table. (Mumbai Indians Take on Confident Gujarat Lions in Keen Contest)

Chasing 144 for a win, the Lions lost an early wicket before Finch's 67 off 54 balls, studded with a six and seven fours, kept one end up and guide his side home to a well-deserved victory. (Aaron Finch Hails Dwayne Bravo's Efforts in Gujarat Lions' Victory)

The visitors reached 147 for 7 in the last ball after facing some anxious moments when they lost two wickets in the penultimate over from Mitchell Mclenaghan, MI's best bowler with 4 for 21.

Gujarat Lions needed 11 runs from the last over and the 29-year-old Finch, who suffered a hamstring problem in the 18th over, and Dhawal Kulkarni (6 not out) got the required runs with the Australian fittingly hitting a pulled four off the final ball bowled by Jasprit Bumrah after the scores were tied.

The visiting team, sans key all-rounder Ravindra Jadeja who opted out of the game due to his marriage on Sunday, played clinically efficient cricket to dump MI to their second defeat in as many home games this season.

Opting to field first, the Lions did not allow MI to fly off to a good start, reducing the hosts and two-time winners to 19 for 2 initially and then 77 for five, and the home team never fully recovered from this early wobble.

Only a late stand of 42 in the last three overs between Krunal Pandya (18 not out) and Tim Southee (25 in 11 balls) helped MI recover to some extent and post a score in excess of 140.

MI now travel to Hyderabad to take on Sunrisers on April 18 while the Lions head home to Rajkot to clash with the Hyderabad franchise on April 21.

Asked to bat first, Mumbai Indians batting failed to click for the second time in as many home games as they were restricted to 143 for 8 by Gujarat Lions.

Only two top-order batsmen -- opener Parthiv Patel (34 in 29 balls) and Ambati Rayudu (20 in 19 balls) -- managed to cross 20-run mark as the strong batting line-up caved in meekly against both pace and spin after being put into bat on a seaming track offering good pace and bounce.

The 42-run stand for the eighth wicket between debutant Krunal Pandya (18 not out off 10 balls) and Tim Southee, who used the long handle to hit two sixes and one four in a 11-ball 25, was the highest of the innings.

At the same ground on April 9, MI had been kept down to 121 for 8 by the other IPL debutants Rising Pune Supergiants before losing the tournament opener.

The main wreckers of the Mumbai innings were two city-bred bowlers, seamer Dhawal Kulkarni (2 for 19) and leg-spinner Pravin Tambe (2 for 12).

MI slumped into trouble straightaway by losing the wickets of captain Rohit Sharma and one-down Hardik Pandya in the second and fourth overs respectively.

Both were dismissed by Mumbai Ranji Trophy pacer Kulkarni who got a chance to play at his home ground since all-rounder Ravindra Jadeja did not accompany the team to the game as he's getting married tomorrow at Rajkot.

Both were planned dismissals with fielder Shadab Jakati stationed at square leg to pouch the flick by Rohit and the pull off a short ball by Pandya to leave the home team at a tricky 19 for 2.

At the end of six overs, MI had moved to 31 for 2 with Parthiv looking good at one end after having struck Kumar for two boundaries in the bowler's second over and lofted Jakati for his first six over long on.

But two wickets in the space of seven balls, that saw the backs of Buttler (16) and the big-hitting Kieron Pollard (1) put MI on the back-foot again at 59 for 4 just past the half-way stage of the innings.

Buttler, who hit three fours, was stumped on leg side by wicketkeeper Dinesh Karthik off a ball declared wide from left arm spinner Jakati soon after MI reached 50 in ninth over.

And then Pollard departed to a skier off the first ball he faced from leg-spinner Pravin Tambe, with fellow West Indian Dwayne Bravo bringing off a well-judged catch just inside the rope and then doing the 'Champion' jig that he had made popular during the Windies' victory in World T20.

When Patel departed while attempting to hit a third six over mid wicket off Tambe's long hop, MI were in deep trouble.

Harbhjan Singh, who had made a counter-punching 45 against Pune, could not repeat that show, and with Rayudu too falling in trying to up the tempo, MI were 99 for 7 before adding 42 runs in the last three overs.