Indian Premier League chairman Rajeev Shukla said organisers engaged the anti-graft unit of the International Cricket Council, local police and the expertise of a former top cop to keep a check on corruption. 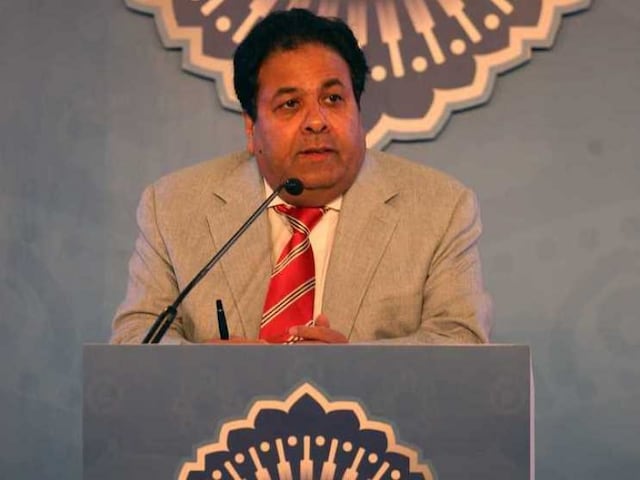 Rajeev Shukla is the chairman of the Indian Premier League.© BCCI

Indian Premier League chairman Rajeev Shukla told AFP that this year's edition of the cash-rich extravaganza had been free of corruption thanks to a multi-pronged approach to tackling fixing.

In an interview shortly before Sunday's final, Shukla said organisers engaged the anti-graft unit of the International Cricket Council (ICC), local police and the expertise of a former top cop.

The IPL is the most popular domestic league in the world but has been plagued by controversies since its inception in 2008, with corruption and match-fixing cases often taking centre-stage.

Shukla said an aggressive approach to tackling fixing meant there had been no signs of corruption at the ninth edition of the IPL, which featured 60 matches in 57 days across 11 venues.

"All precautions were taken in order to curb corruption and we have been successful in that," Shukla told AFP in Bangalore, before Sunrisers Hyderabad's eight-run victory over Royal Challengers Bangalore.

"We also spoke to Mumbai police and said that if we need any assistance, they should be ready for it," Shukla added.

In earlier editions the Board of Control for Cricket in India (BCCI), which runs the IPL, has not always called upon the ICC's Anti-Corruption Unit.

Kumar is a former commissioner of Delhi police and an ex-joint director of India's leading investigating agency, the Central Bureau of Investigation.

Sreesanth, a Rajasthan Royals bowler, was banned for life along with team-mates Ankit Chavan and Ajit Chandila for their involvement in the spot-fixing and betting scandal.

They were arrested in 2013 along with scores of bookies as part of the probe into allegations that players had underperformed in return for cash from bookmakers.

Criminal charges were dropped but the players were banned for breaching the BCCI's code of conduct. The Rajasthan Royals were suspended while the Chennai Super Kings were also temporarily barred for misconduct by its officials.

As @IPL 2016 came to an end tonight, I thank all the stakeholders, the media and millions of cricket lovers to make it a huge success.

Shukla resigned as IPL chairman as the spot-fixing controversy threatened to destroy the Twenty20 league, but he was re-appointed in 2015.

In his interview with AFP, the IPL boss also played down speculation that the league could be taken out of India.

Then BCCI secretary Anurag Thakur, since elevated to president of the powerful body, was reported as saying in April that a move abroad was under consideration.

But Shukla said any talk about a shift overseas was in response to a Bombay High Court decision that saw 13 matches shifted out of Maharashtra state because of drought.

"Talks of IPL moving out of India was a knee-jerk reaction at the time of last-minute venue shifting," said Shukla.

"Everybody was feeling so bad that suddenly for no substantial reason we have been asked to shift the matches, obviously people made comments out of frustration," he added.

The IPL has been played outside India twice, during general election years: in 2009 in South Africa and then in 2014, when opening games took place in the United Arab Emirates.

Comments
Topics mentioned in this article
IPL 9 Cricket
Get the latest Cricket news, check out the India cricket schedule, Cricket live score . Like us on Facebook or follow us on Twitter for more sports updates. You can also download the NDTV Cricket app for Android or iOS.