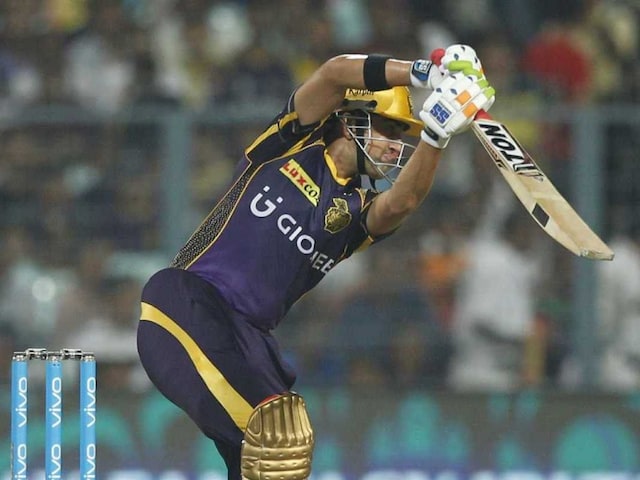 Kolkata Knight Riders skipper Gautam Gambhir top scored with 38 not out as his side chased down the Daredevils' target of 99 with ease.© BCCI

Knight Riders shot out a lacklustre Delhi for 98 before cantering home in 14.1 overs with openers skipper Gautam Gambhir (38 not out) and Robin Uthappa (35) sharing a brisk 69-run stand. (Balanced Gujarat Lions Aim for Winning Start Against Kings XI Punjab)

Andre Russell (3/24) and 45-year-old Brad Hogg (3/19) were the star bowlers for the home team after Gambhir put the opposition in.

While the two-time champions made an ideal start to the season, a fresh squad, mentored by Rahul Dravid, did not change the fortunes of Delhi, who finished seventh out of eight teams in 2015.

Cricket returned to Eden Gardens on the same strip exactly a week after West Indies rode on Carlos Brathwaite six-hitting heroics to lift their second World Twenty20 title and the 25,000-odd Knights fans could not have hoped for a better start for Knight Riders, the two-time champions.

Gambhir and Uthappa made batting look easy during the chase as the team completed a convincing win. Gambhir was solid in his 41-ball knock, collecting five fours while Uthappa smashed seven boundaries including a couple of delightful straight drives.

Earlier, a brilliant bowling effort enabled Knight Riders to dismiss Daredevils for a paltry total. Pacers Russell and John Hastings (2/6) triggered the collapse before the spin duo of Hogg and Piyush Chawla (2/21) came to the party.

Put in, Delhi Daredevils raced to 24 in just 13 balls with Knight Riders having some initial hiccups.

The Knight Riders bounced back in the next over with Russell giving twin breakthroughs of de Kock (17 from 10 balls) and Shreyas Iyer (0) before Hastings tightened things up at the other end.

Introduced only at midway stage, Knight Riders spin armoury, without their ace weapon Sunil Narine, lived up to the expectation as Hogg and Piyush Chawla foxed a clueless looking Daredevils batting line-up.

Pawan Negi (11) and Sanju Samson (15) tried to repair the damage with a 20-run partnership but Hogg brilliantly set up the former with two dot balls before deceiving the left-hander with his flight to have him stumped.

Coming at No.7, Carlos Brathwaite received a thunderous applause from the KKR supporters as the World T20 hero lived up to the hype with a second-ball six but only to be trapped plumb deceived by a Chawla googly two balls later.

Earlier, de Kock was deceived by the bounce and took a top edge that Yusuf Pathan almost fumbled at mid-off with the ball popping out before taking in his third attempt.

He trapped Iyer lbw on his last ball while at the other end, Hastings bowled a tidy over with five dot balls giving away just one run as boundaries suddenly dried up with two new batsmen at the crease.

Russell's third over proved to be a match-turning from the Knights perspective as Daredevils failed to overcome from the twin setbacks with their young Indian batsman showing little application.

Their run-rate was well above eight after the third over and what was needed was smart rotation of strikes but the likes of Mayank Agarwal (9) and Karun Nair (3) perished playing expansive shots.