Piyush Chawla has said Brad Hogg's performance, where he picked up 3/19, made life easy for him as Kolkata Knight Riders defeated Delhi Daredevils in the Indian Premier League. 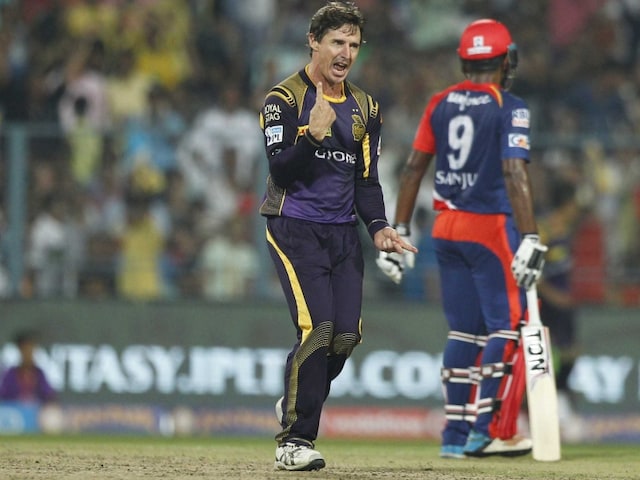 Kolkata Knight Riders leg-spinner Piyush Chawla says it was fun bowling in tandem with veteran Brad Hogg and the Australian's performance made life easier for him from the other end. (Zaheer Khan Optimistic About Delhi Daredevils Despite Heavy Loss)

Hogg returned with the best figures of 3/19 for KKR as their spinners turned it around after medium pacers Andre Russell (3/24) and John Hastings (2/6) rattled the top order to dismiss Delhi Daredevils for a paltry 98 in 17.4 overs. (IPL: KKR Defeat DD)

"He's (Hogg) always energetic and it's fun bowling with him. He really boosts you to do well at the other end that really happened today. The way he started, giving away just two runs and picking up a wicket, from the other end, it was just about keeping it tight," said Chawla (2/21) in the post-match press conference after KKR thrashed Daredevils by nine wickets in an Indian Premier League match last night.

"As a wrist spinner Hogg and I have that bit of advantage on any wicket to get that turn if we bowl in the right areas and with good pace. It gives you a mental boost," he said.

KKR will next face Mumbai Indians here on April 13 before embarking on a journey of six successive away matches because of Assembly polls in West Bengal.

"You will get slow wickets in Kolkata and a couple of other places. Mostly we will get different types of wickets in our away matches. So it was a good start for us as spinners," Chawla said.

Chawla said the win against Daredevils was convincing yesterday but they never expected such a stroll in the park.

"We never thought it's going to come that easy. But it was quite convincing. From here we have to look forward. We know some big challenges are ahead of us," he said.

West Indies' hero of World Twenty20 final, Carlos Brathwaite was one of Chawla's two victims as the Barbadian was trapped LBW after he clobbered the leg-spinner for s six in the same over.

"I just wanted to bowl in the right areas and follow my basics, and just keep it simple. He (Brathwaite) can hit a long ball and that's what he did in the second ball itself. I just wanted to come back strongly. It went according to the plan and I got him out," said Chawla.

Asked about the Eden surface on offer yesterday, he said, "We knew it would be a little bit on the bouncy side. It went according to plan with the kind of combination we played. The kind of start given by the medium pacers made it a little easier for the spinners."

Comments
Topics mentioned in this article
Kolkata Knight Riders Delhi Daredevils Piyush Chawla Brad Hogg IPL 9 Eden Gardens Cricket
Get the latest Cricket news, check out the India cricket schedule, Cricket live score . Like us on Facebook or follow us on Twitter for more sports updates. You can also download the NDTV Cricket app for Android or iOS.