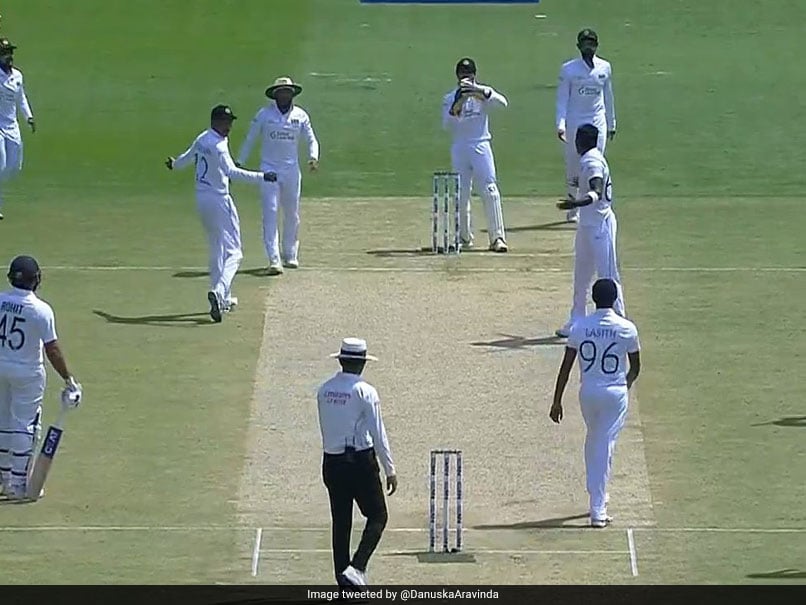 IND vs SL: Nirsoshan Dickwella added to the confusion during Mayank Agarwal's bizarre run out.© Twitter

India opener Mayank Agarwal was run out in strange circumstances on Day 1 of the second Test against Sri Lanka at the M Chinnaswamy Stadium in Bengaluru. More than Mayank's mix-up with captain Rohit Sharma, it was Sri Lanka wicketkeeper Niroshan Dickwella's antics that added to the confusion of the events. Instead of taking the bails off at the first opportunity when Mayank was miles away from the crease, Dickwella insisted on taking a review. It was after he had made the 'T' gesture that he took the bails off to run Mayank out. Reacting to the turn of events, former India cricketer Sunil Gavaskar said Dickwella's insistence on taking a review was "beyond understanding".

It all transpired in the second over of the morning session when Sri Lanka pacer Vishwa Fernando deceived Mayank with an in-dipper. The Sri Lankan players went up in a vociferous appeal but umpire Anil Chaudhary shook his head. In between all this, Mayank took off for a single but Rohit at the other end was late to respond and by the time he sent Mayank back, it was too late.

"Why Dickwella was asking for a review before removing the bails is beyond understanding," Gavaskar said on commentary.

"The reason for this (the confusion between Mayank and Rohit) is Sri Lanka's unusual field placement," said former Sri Lanka cricketer Russell Arnold.

"Russell makes a valid point. The striker may not have seen the point fielder sneaking in," replied Harsha Bhogle.

Sri Lanka had stationed Praveen Jayawickrama at backward point, which was deeper than usual. The commentators believed Mayank might have thought that he had beaten the in-field and could take a single but Jayawickrama sauntered in and threw the ball back to Dickwella, who completed the easy run out but not before signaling for a review.

As it turned out, the third umpire informed umpire Chaudhary that Fernando had overstepped, which took the review for LBW out of the equation but since according to the rules, a batter can be run out off a no ball, Mayank had to take the long walk back to the dressing room for 4.

Batting first, India rode on a stunning 92-run knock off just 98 balls from Shreyas Iyer to get to 252 on a pitch that was offering a lot of turn for the spinners.

In reply, Indian seamers Jasprit Bumrah and Mohammed Shami made the new ball talk and ran through Sri Lanka's top-order.

Bumrah took three wickets, Shami had two while Axar Patel chipped in with one as Sri Lanka found themselves in heaps of trouble at 86 for six at stumps on Day 1.

Sunil Gavaskar Cricket
Get the latest updates on Fifa Worldcup 2022 and check out  Fifa World Cup Schedule, Stats and Live Cricket Score. Like us on Facebook or follow us on Twitter for more sports updates. You can also download the NDTV Cricket app for Android or iOS.