India's pace duo of Shardul Thakur and Navdeep Saini made their first appearance on Chahal TV. 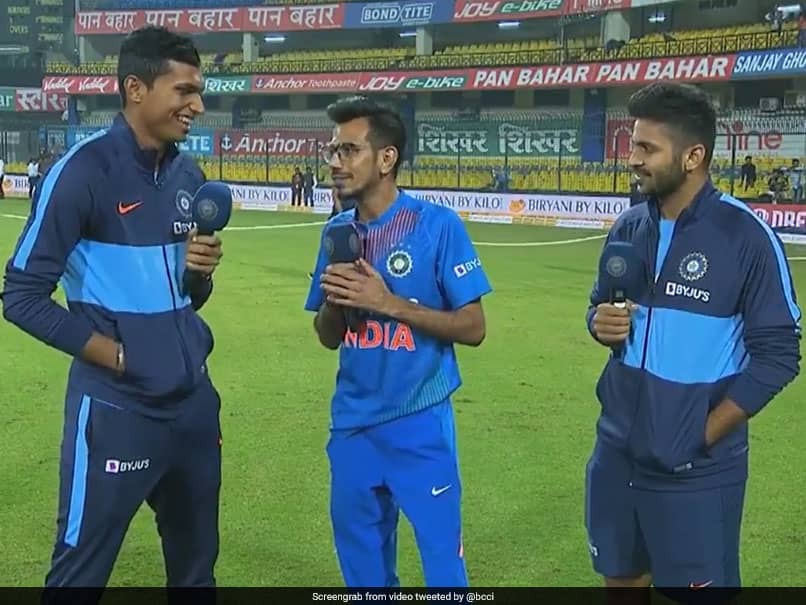 Navdeep Saini was the star for India as the hosts registered an easy win over Sri Lanka in the second T20I of the three-match series in Indore on Tuesday. Navdeep Saini picked up two wickets and conceded just 18 runs in his quota of four overs. After the match, Yuzvendra Chahal, who was not included in the playing XI, interviewed Shardul Thakur and Saini. During the conversation, Yuzvendra Chahal complimented Navdeep Saini for bowling accurate yorkers while taking a cheeky dig at the young fast-bowler. "Since Jasprit Bumrah is the yorker king, so are you yorker queen?" Chahal jokingly asked Saini that left all everyone in splits.

MUST WATCH: @imShard and Navdeep Saini make their debut on CHAHAL TV

In the match, Virat Kohli won the toss and opted to bowl. The bowlers struck in unison as India managed to restrict Sri Lanka to a below-par total of 142 for nine in their allotted 20 overs.

While Saini picked up a couple of wickets, Shardul Thakur bagged three in the 19th over.

Chasing 143 for the win, Indian openers Shikhar Dhawan and KL Rahul laid the foundation for the hosts with an opening stand of 71 runs.

For Sri Lanka, Wanindu Hasaranga was the pick of the bowlers who finished with figures of two for 20 from his four overs.

Hasaranga had struck twice in two overs to leave India at 86 for two at one stage.

Virat Kohli and Shreyas Iyer then put on a 51-run stand for the third wicket.

Kohli finished the match with a maximum over square leg to help India take an unassailable 1-0 lead in the three-match series.

The first match was called off due to damp patches on the pitch. Pune will host the third and final T20I on Friday.

Yuzvendra Chahal India vs Sri Lanka, 2020 Cricket
Get the latest updates on IPL 2021, IPL Points Table , IPL Schedule 2021 , live score . Like us on Facebook or follow us on Twitter for more sports updates. You can also download the NDTV Cricket app for Android or iOS.