Jasprit Bumrah is all set to make his return from injury with the three-match T20I series between India and Sri Lanka. 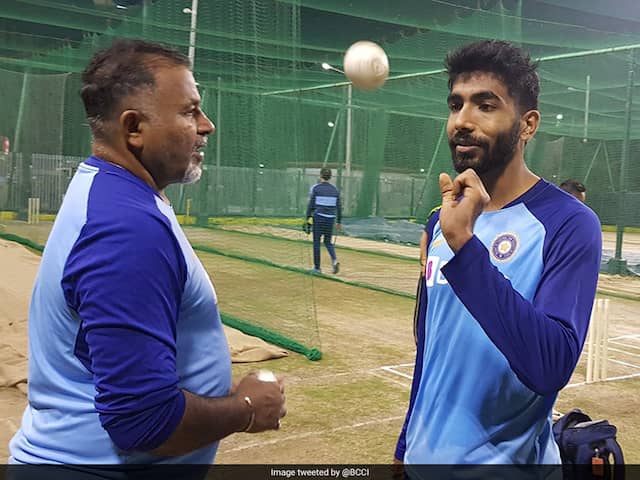 Jasprit Bumrah suffered a stress fracture in his lower back in September 2019.© Twitter@bcci

Jasprit Bumrah, the spearhead of the Indian pace attack, suffered a stress fracture in his lower back in September 2019 and has been missing in action from international cricket since then. However, Bumrah, whose pace, accuracy and impeccable death-bowling skills have earned him a lot of praise from fans and cricket experts around the world, is all set to make his return to the international arena with the three-match Twenty20 International series between India and Sri Lanka. Ahead of the first T20I to be played in Guwahati on Sunday, the Board of Control for Cricket in India (BCCI) announced the return of the premier pacer with a picture, followed by a stump-smashing video. "And...He's BACK @Jaspritbumrah93 all set for a session at the nets," the BCCI captioned the picture of Jasprit Bumrah engrossed in a conversation with India bowling coach Bharat Arun.

And...He's BACK @Jaspritbumrah93 all set for a session at the nets pic.twitter.com/pTIq84RXee

The BCCI then posted a video in which Bumrah can seen shattering the stumps during a training session on Friday.

"Missed this sight anyone? How's that from @Jaspritbumrah93 #TeamIndia #INDvSL," the video was captioned.

Missed this sight anyone?
How's that from @Jaspritbumrah93 #TeamIndia #INDvSL pic.twitter.com/hoZAmnvE2k

Since making his India debut in 2016, Bumrah's unorthodox action, natural pace and wicket-taking abilities have made him a vital cog in the Indian cricket team's scheme of things.

Therefore, his return will be extremely crucial as India are in the process of figuring out their combination for the T20 World Cup to be played in Australia in October.

Jasprit Bumrah, who has not played for India since the tour of the West Indies in August-September, has also been included in the squad for the three-match home ODI series against Australia starting on January 14 in Mumbai.

Jasprit Bumrah India vs Sri Lanka, 2020 Cricket
Get the latest Cricket news, check out the India cricket schedule, Cricket live score . Like us on Facebook or follow us on Twitter for more sports updates. You can also download the NDTV Cricket app for Android or iOS.