Sunil Gavaskar was the only cricket pundit who came out in support for the pitches prepared and instead pointed the finger at the South African batsmen's poor showing in the four-Test series in India. 'Diabolical', 'minefield', 'a poor advertisement for Test cricket' - the cricket world cursed India's pitches in the just-concluded series with South Africa. The Nagpur turf, in particular, bore the brunt of it all. Even the International Cricket Council hauled up India. (India Face International Cricket Council Sanction Over 'Poor' Nagpur Pitch, BCCI Has Two Weeks to Respond)

But was it really that bad?

In both innings India were in strong position, 101 for three in the first when the slide started. In the second, the hosts were 161 for three and then courtesy some poor shot selection juxtaposed with some brilliant fielding, they were shot out for 200.

Nineteen South Africans wickets were picked by Indian spinners on a Mohali pitch that was slow and dry but not taking prodigious turn.

South Africa cleaned up for 214 at Bangalore on a pitch that even the visiting experts deemed placid for batting. India were 80 for no loss when rain gods came to the Proteas rescue.

Here as well, spinners accounted for eight wickets with Varun Aaron taking the sole wicket by an Indian pacer and one run out. 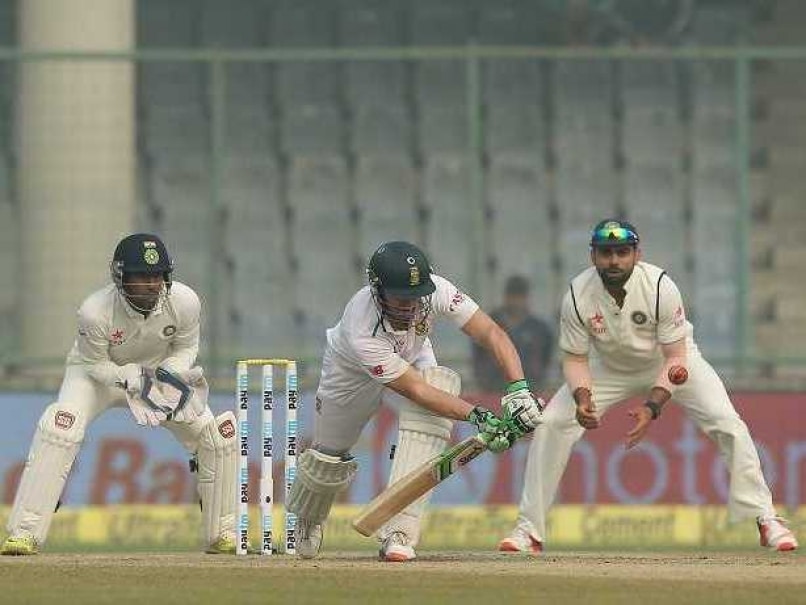 AB de Villiers was the only saving grace for South Africa and ended the series as the second highest run-getter with 258 runs.

Does anyone else sense a pattern? The South Africans, barring AB de Villiers, just made it look so extremely hard.

And just to make a point, Dean Elgar was not turning the ball square when he took four Indian scalps in Mohali.

Indian spinners in contrast had a field day like never before as they bagged 61, with a meagre return of eight for the hosts pacers.

There is no question about the fact that the Mohali and Nagpur pitches -- Bengaluru was plain harakiri from the South Africans -- were slow, dry pitches, which took turn from ball one, however to call them diabolical is going a bit too far. Ravichandran Ashwin's return of 31 wickets against South Africa helped the off-spinner win his fifth Man of the Series award.

Let's not forget the Ravichandran Ashwin factor. The South Africans found the going hard against the man from down 'South' even in the one-dayers. (Ravichandran Ashwin, India's One-Man Demolition Army, En Route to Greatness)

And once he was injured, the South Africans made hay till the sun shined - remember Wankhede!

Virat Kohli to all his credit took all advantage and threw his ace right in the beginning, with smashing success.

Ashwin took the first wicket and went on to grab four and another three in the second in Mohali.

The panic had already set in, even at a decent batting track at the M. Chinaswamy, the Proteas were like hopping bunnies in front of spin.

Then came the Nagpur 'minefield', where falling like nine-pins was given a new meaning by the South African first innings batting.

With some application and technique coming to the fore, the visitors did manage to score 185 in the second innings.

In all this mayhem Ravindra Jadeja, making a comeback, bagged 23 wickets in the series - without turning a ball so viciously that it would leave a batsman bamboozled.

His weapon - not spinning, on a spinning track!

Majority of Jadeja's deliveries were bowled flat and on the quicker side, angled into the stumps or dead straight.

The South African fell for it bad, trying to play for the turn and found themselves sitting ducks on his straighter ones.

The most surprising part in all of this has been that no one has spoken about the poor performance of the batsmen from the top side in world cricket. How come, their batting prowess has not come under criticism?

South Africa's batting has been nothing short of despicable and that point was highlighted in the fourth and final Test at the Feroz Shah Kotla in Delhi.

While India scored 334 in the first innings, the South Africans then again fell like a deck of cards and were dismissed for 121 with spinners again taking seven wickets.

The Indians were 260 for five in the second when they declared. What the South Africans did surprised one and all. Needing to chase 481 for a win with over a-day-and-a-half left, the Proteas left their scoring bats back in the dressing room and tried to defend their way out.

They managed for a while but were once again found wanting when a Hashim Amla-AB de Villiers stubborn vigil came to an end.

As a great man once said - in this case, a certain Mr. Sunil Gavaskar - "the battle was lost in the dressing room". (South Africa Lost Series Against India in Dressing Room: Sunil Gavaskar)

"Even the last South African batsman (in Kotla) got out to a straight ball. South Africa did not play like the No.1 Test team in the world."

"Their mind was muddled with turn, turn and turn. They lost the matches in the dressing room." - wise words from a man who had a knack of making the impossible look easy.