India captain Virat Kohli said though his team did not pay heed to what the media wrote, it was unfair to credit India's 3-0 Test series win over South Africa to only spin-friendly tracks 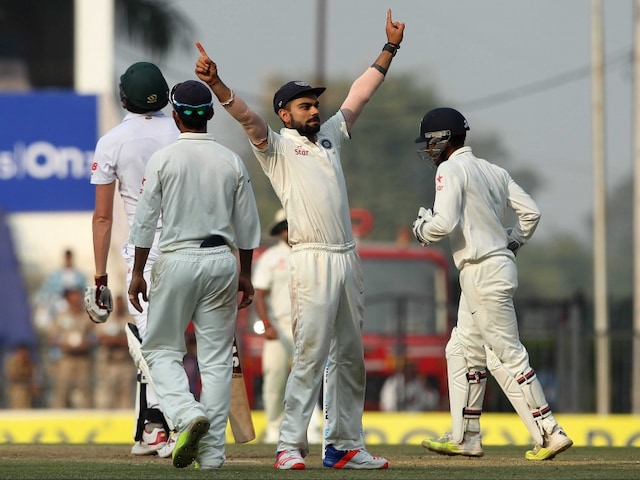 India Test captain Virat Kohli was at his jovial best as he took a dig at the media stating that his team always "had answers" when it came to winning matches irrespective of the playing conditions. (India Conquer South Africa at Kotla; Ravichandran Ashwin, Umesh Yadav Help Win Series 3-0)

Kohli had to answer numerous questions on spin-friendly tracks after India defeated South Africa in Mohali and Nagpur inside three days. They wrapped up the series 3-0 after beating the Proteas by 337 runs in the fourth Test in the Capital. (South Africa Lost Series Against India in Dressing Room: Sunil Gavaskar)

When asked, if he has replied to all those who were seeking an answer on how the team plays in adverse conditions, Kohli gave a tongue-in cheek reply. (Kotla Win Most Special in This Series: Virat Kohli)

"We always knew the answer. It is you people, who perhaps did not get the answer but today I guess you got the answer. I was waiting for this question (laughs), five to six questions and no questions on the pitch. No questions on whether the ball was turning," he had that wry smile on his face as everyone present started laughing. (India Jump From No. 4 to No. 2 Spot in Test Rankings After Series Win)

"The articles that are being written and what people read is also a sort of reaction. You watch something and you write an article. So when you ask a question on a specific issue, you will get a specific answer (from me). It's not that you will ask a question and I will say 'Next question'. Obviously I will answer that but I have a way of explaining while giving an answer." (Ravichandran Ashwin, India's One-Man Demolition Army, En Route to Greatness)

Kohli added that his team did not pay heed to all that was written about India winning the series because of favourable pitches. He even called such allegations as unfair.

"We believe we can win against any opposition at any place in the world. Now how that will be presented (by you) is not in our control. We can only control our performance with the bat and the ball. We can't control what people hear and read," he said.

"Now, I can't sit and vouch about how good a team we are. You are free to write whatever you want. All we can do is to perform. If we do well, you will write good things, if we falter, our weaknesses will be pointed out which is fair. But if it's written that pitch is a factor in victory, then it's unfair." 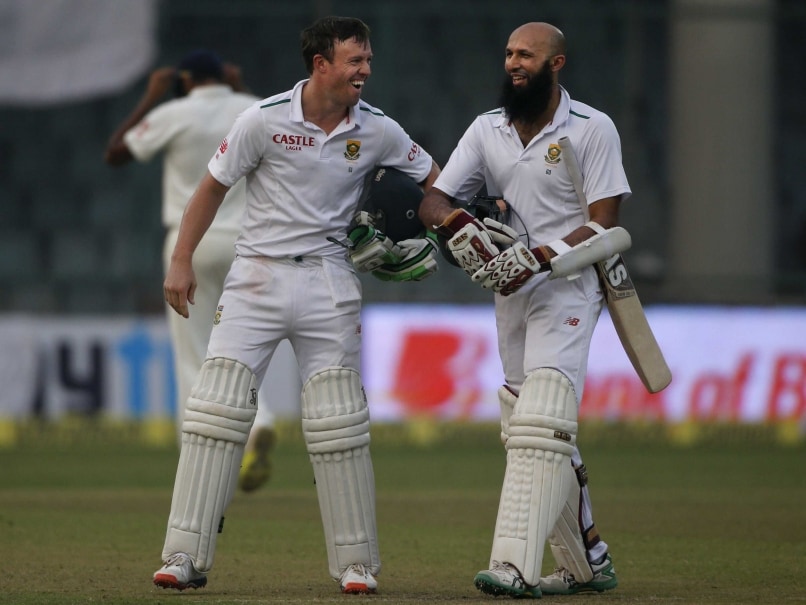 Kohli also lauded the dogged defending by the Proteas and called it a "difficult skill" as it also tested the ability of his bowlers.

"To play like that is a difficult skill. I was surprised with their approach. More than that, they were happy that bowlers were going through a phase where their patience and character would be tested. We came out with flying colours.

"We knew that Test cricket is about three sessions and we knew we will get that one chance. We had to make sure that we have to be in that mindset to cash in. Everyone had proper intensity and we were able to finish the game," Kohli said.

Kohli said that at no point of time did he feel that he was missing Amit Mishra, especially when it looked that South Africans may draw the match.

"Not at all. I think, we were able to use our part timers because South Africa were batting so slowly. There was no sort of approach where it looked that they wanted to score. So it was easy to rest my main bowlers and use the part-timers.

"It was surprising to find the way they came out and decided to start defending from ball one. That helped into bring in part-timers and keep my main bowlers fresh as well," he explained.

'Nothing Wrong With South Africa's Approach'

However, Kohli said that he found nothing wrong with South Africa's approach in trying to save the match.

"It's a personal strategy from a team. Way we batted and bowled in second innings, people would have enjoyed as we came out of both difficult situations. Let's speak about that rather than commenting on whether they batted in spirit of the game. We also block boundaries when shots are played. That's their choice, the way they want to come out and save the game." 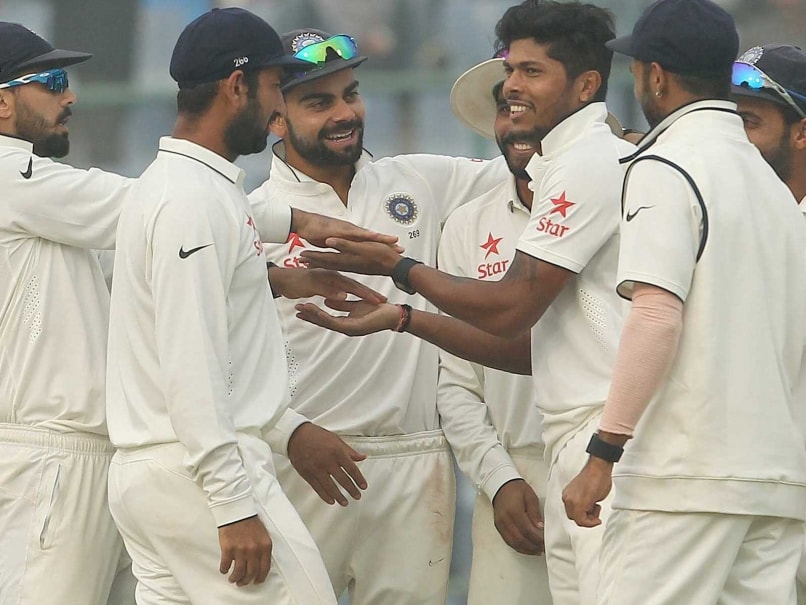 Virat Kohli was impressed with the way the young Indian players performed against South Africa.

Kohli believes that this win will have a positive impact on the young team.

"It has a positive and huge impact on the mindset of players, because as I said, it all started in Australia because of the kind of belief with which we went there and the kind of cricket that we played there. It gave us the confidence that we can beat any side in the world.

"That sort of mindset is important to win Tests and series. If you win one Test match, it can turn around pretty quickly. We saw that in Sri Lanka. That was major boost for our mental set-up. This is the icing on the cake. An achievement we can be proud of," the skipper added lauding his players.

"Ashwin, Umesh, Varun, Mishra, our top four bowlers are not so far away from each other. Everyone is contributing, which is essence of any good team, that's why we have been able to win the last two series," he said.

'Defeat in Australia, The Turning Point'

Talking about Australia, Kohli feels that the kind of fight they put on Down Under set the tone for this young side.

"Test cricket has been one format where we all have wanted to do well. Like to give credit to the team to show character and bounce back in last two series like the way we have. I feel that it all began in Australia for us, the way we played there. We showed character even in defeats. We had a few plans, rules things that we needed to do in order to do well and gave everyone responsibility that you have to give your 110 percent effort every single day.

"You are being honest to work ethics team requires going out there to play the best cricket that one can play. Not focusing on opposition too much, not on what people were saying. We focused on our skills. Strong bond that team requires," the skipper explained.

Captaincy, Kohli admits is not an easy job as one also needs to be patient at times.

"When a team keeps winning, confidence automatically grows. Captaincy is not an easy job as you do have challenging situations. You have to maintain your focus, wait for that half chance, as too many changes send wrong message, you need to stay focused.

"That one wicket will come at some stage and after that you can cash in on with your aggressive mindset. It's about not panicking when things don't go your way.

"I have enjoyed it (captaincy). I relish making plans with bowlers, as when it comes off, that particular feeling is hard to explain. I like the fact that I am always involved in things, active, it fits me perfectly," said Kohli.

There was a question on styles of captaincy with a mild hint towards former Test captain Mahendra Singh Dhoni's style without naming him but Kohli gave a diplomatic reply. And that too without taking Dhoni's name even once.

"Well tried," he laughed. "I have my own style. That exactly what happens when different individuals are captaining. Not as if it doesn't work. Different people have different ways of making it work. I don't think we should compare two individuals when they are playing for the same country."

Comments
Topics mentioned in this article
Virat Kohli Ravichandran Ashwin Ravindra Jadeja South Africa in India Series, 2015 Cricket
Get the latest Cricket news, check out the India cricket schedule, Cricket live score . Like us on Facebook or follow us on Twitter for more sports updates. You can also download the NDTV Cricket app for Android or iOS.