Talks About the Pitches Are Getting Out of Hand, Says Ravichandran Ashwin

Indian off-spinner Ravichandran Ashwin who picked up 5/32 in South Africa's first innings said he was not amused by the fact that focus of discussion during the Test series has been the nature of tracks. 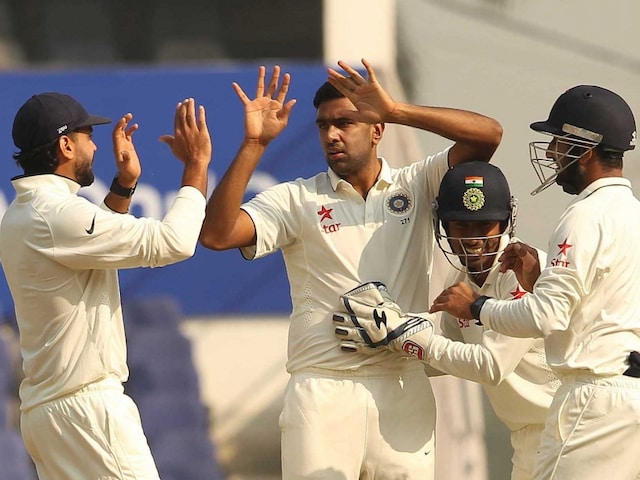 Ravichandran Ashwin is of the view that mentally the South Africans have lost the battle.© BCCI

Indian off spinner Ravichandran Ashwin questioned all those who are critical of Indian pitches offering substantial turn asking why no one raises a question when an Ashes Test at Trent bridge ends in just a shade over two days.Â Â (ScorecardÂ |Highlights)

The feisty off-spinner also did not forget to take a dig at the South African tracks like the one in Johannesburg where he did not get any purchase from a fifth day track back in December 2013. Â (India vs South Africa: Sunil Gavaskar Hits Back at Indian Pitch Critics)

"I did not complain after Johannesburg (Test). I was dropped for a year after that. And, I am not going to complain playing here. There's no reason why I should have complaints. Swing, seam and bounce for two days at Trent Bridge (referring to Ashes)- match over. I don't know what that's about," Ashwin could not hide his sarcasm when asked about South African batsmen being greeted with turning tracks.

"What is the problem about spin and bounce? It is good to have even spin and bounce, isn't it? It's about skills for batsmen to play and counter it," Ashwin put forth his viewpoint.Â

"Fortunately or unfortunately, I don't have the rights over the groundsman, to say over what kind of pitch he needs to prepare. Once that's done, it is my job to go out and play," said Ashwin, who picked his second five-wicket haul in the series.

Ashwin also did not seem amused by the fact that focus of discussion during the Test series has been the nature of tracks.Â (Sunil Gavaskar Slams Hashim Amla's Tactics During Nagpur Test)

"The talks about the pitch are getting out of hand. That's straight from my heart, you can beg to differ with me. There are enough good cricketers from both sides that you can talk about," he shot back.

Ashwin, who has been the scourge of the South African batsmen right through the series, said that the two wickets he got this morning swung the game in India's favour.

"To top it off, this morning the first four balls that I bowled, it pretty much swung the game in our direction. It was copy book stuff. From then on, it was catch-up game for them," he said about his dismissals early in the day of Dean Elgar and rival captain Hashim Amla in three balls in successive overs which reduced South Africa to 12 for four.

Ashwin said that the pitch was getting slower by the day and patience was the key for a bowler to dismiss a batsman.Â (Losing Five Wickets for 12 Runs, South Africa Record New Test Low vs India)

"On a pitch like this, the bowler who can get the ball to go straight on is going to get the edge into play. That was my plan in the first innings. In second innings, I revised it a bit. In the second innings, we have to be patient.

"We were very disciplined this morning, the same thing we have to apply tomorrow. Wicket is getting sluggish by the day, pretty dry and slow. This wicket is where the batsmen need to plan. The areas to score are limited. When you put your feet down and defend properly it's still quite a hard wicket to get through the defence."

He sympathized with South African opener Stiaan van Zyl and their off-spinner Simon Harmer for their predicaments.

"He has changed the stance two or three times during the series, taking middle stump stance, standing outside leg stump in this innings. He has looked to hit me inside out. Every time I see a plan, I try and adjust to it. Thankfully enough I have been able to do it."

Ashwin said that mentally the Proteas have lost the battle.

"Yes, I think it is mental. If you keep getting out to a particular bowler, you feel like you are going to nick one ball off anytime," Ashwin said about Van Zyl, who has been dismissed by the off-spinner on all five completed innings in the series so far.

"It's about what best to extract from the pitch. What needs to be factored in is also the amount of rest the bowler gets. Simon Harmer bowled the whole day yesterday and he was back today from the first session. It is not going to be easy. I have been there before," he said.

Ashwin said that he is happy that Hashim Amla walked after being caught by Rahane in the first innings without waiting for the umpire's decision.

"I think the game is a very, very even leveller. I walked (after being given out) in Sri Lanka. He's walked for me here. I'm very pleased about it, I have a wicket and Hashim Amla is a wicket that I would prize any day," Ashwin concluded.