Morne Morkel revealed that Dale Styen did bowl in nets but a final call on his third Test participation will be taken on opening day morning of the third Test. 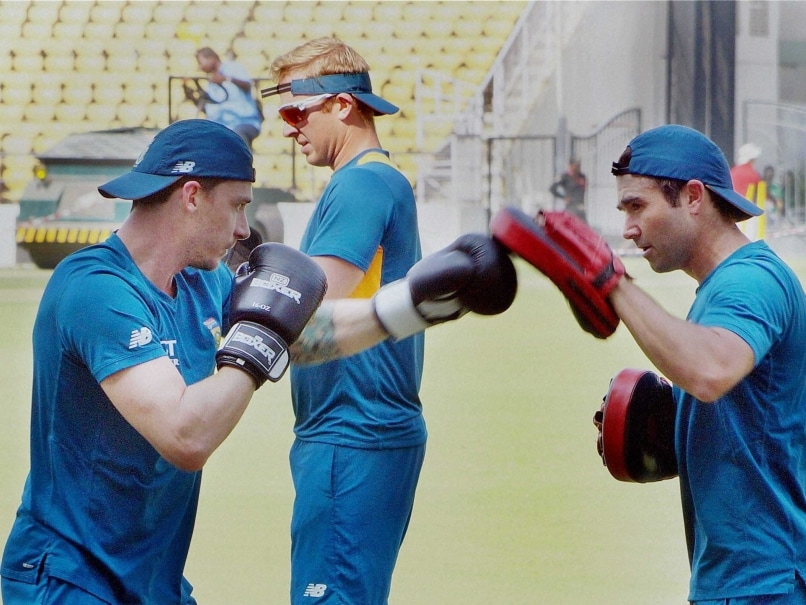 Injured South Africa pacer Dale Steyn bowled for a short while in the nets, raising hopes of him being included in the playing XI in the third Test in Nagpur against India, but his fast bowling partner Morne Morkel said the team is keeping its fingers crossed. (India vs South Africa: Dale Steyn Ruled Out of Bangalore Test)

Morkel said that while it was pleasing to see Steyn bowling in the nets, his progress would be monitored and a final call on including him will be taken on the opening day morning of the third Test at the VCA Stadium in Jamtha.

"Dale bowled this morning. It was a pleasing thing for us to see. Obviously groin is a tricky sort of injury. So I think we will keep monitoring and give him 9 am on Wednesday to decide," Morkel told reporters today.

Morkel said the final call on playing Steyn, who picked up 10 wickets in South Africa's innings win over India at this venue five years ago, would be taken by the team's medical staff. (Why India Should be Wary of Dale Steyn)

"I think it will be a medical call. You don't want to select a bowler who could break down and upset the combinations. It's a bit of a tough one, but I know medical staff will take the right call," he said.

"Dale is dying to get out there, do his things. Fingers crossed," he added. (JP Duminy, Morne Morkel Set for Return, Dale Steyn to Have Fitness Test)

On Steyn's back-up Marchant de Lange, Morkel said: "He can be quite tricky to face. He's been busy with one-day competitions at home. Of late he's not played much of four day cricket, (but) he knows what to do."

Down 0-1 in the four-Test series, Morkel said South Africa, as a no. 1 ranked Test outfit, must deliver in the upcoming must-win game.

"We are the No.1 Test team in the world. The (dressing room atmosphere) is very positive. The first Test could not go our way, but we are starting fresh on Wednesday. We are hungry to go and deliver the goods. We speak that language in the change room.

"There are a lot of good memories (about this venue where SA won by an innings in 2010), but you have to put those things aside and focus on disciplined cricket. One has to be mentally tough. We are the No. 1 Test playing nation. We need to show that. Whatever conditions, people have to put up their hands and take it on," he said.

"It's been tricky. We have had injuries throughout the tour (Steyn and Vernon Philander who has gone back and Jean-Paul Duminy who has recovered from a palm injury). But (there are) no excuses for us. We need to come in and delivery and play. Hopefully, we will have five days of good Test cricket," Morkel added.

Morkel said that the team was aware of the spin-friendly pitch conditions here as well.

"Coming here as a fast bowling unit we don't expect favours. We knew we were going to get turners. The way we prepared was the key for us. From a personal point of view it's just (about) bowling well and if we can keep the pressure on the batters."

He said the team had the option to playing a second frontline spinner.

"Definitely that's an option. We have to see. We have Simon Harmer and Dane Piedt," he said.

The pacer felt that the Proteas batsmen are capable of doing much better against the Indian spin attack than they have done so far in the three innings in which the score has not crossed 220.

"Our top-order (batsmen) are quality players of spin. They have not got the starts, unfortunately. They are preparing very well and doing the rights things. I am pretty sure their time will come. It's a matter of sticking to plans and grinding it out and try and bat deep," he said.

Morkel hoped that the out-of-form captain Hashim Amla, who scored a double hundred at this venue for a winning cause five years ago, to come good.

"Hashim is a rock for us. He's hungry to score runs. He's been hitting a lot of balls. Hopefully, his time will come in this Test match."

Comments
Topics mentioned in this article
Dale Steyn Morne Morkel Hashim Amla Marchant de Lange South Africa Cricket Team India Cricket Team South Africa in India Series, 2015 Cricket
Get the latest updates on SA vs IND 2021-22, check out the Schedule and Live Score . Like us on Facebook or follow us on Twitter for more sports updates. You can also download the NDTV Cricket app for Android or iOS.