Ravichandran Ashwin is My Cricketer of The Year: Sunil Gavaskar

Ravichandran Ashwin, who picked up 31 wickets in the South Africa Test series, has not only turned out to be India's bowling spearhead but is also 2015's best player, according to Sunil Gavaskar. The former India captain also lauded Virat Kohli and Co.'s efforts in defeating world No.1 South Africa by a 3-0 margin. 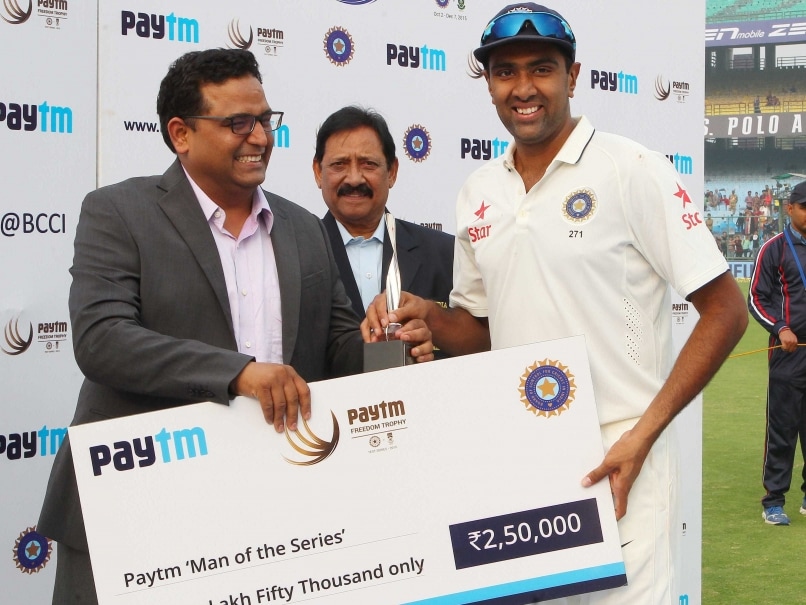 Ravichandran Ashwin has picked up 62 wickets in Tests this year.© BCCI

Ravichandran Ashwin, who was adjudged the Man of the Series against South Africa after his whopping 31-wicket haul in four Tests, is Sunil Gavaskar's pick for 'Cricketer of the Year' award. The former India captain was impressed with the way the off-spinner matured as a bowler this year, which has seen him scalp 62 Test wickets, most by any player. (Ashwin, India's One-Man Demolition Army, En Route to Greatness)

"According to me, Ashwin will win the 'Cricketer of the Year' award in India hands down. Look at the number of wickets that he has taken and the impact he had on the Indian team. His tremendous progress didn't surprise me after all the hard world that he put in," Gavaskar told NDTV.

"He realised that his role was of an off-spinner and not a bowler who can bowl all kind of deliveries. He has also provided depth to the Indian batting. With Ravindra Jadeja at No. 7 and Wriddhiman Saha at No. 8, I think India has got a great line-up now." (Ashwin, Rahane, Kohli Dedicate Win to Chennai Flood Victims)

Ravichandran Ashwin ended with a haul of 5/61 on Monday to help India register an emphatic 337-run win in the fourth Test at Feroz Shah Kotla as the hosts wrapped up the series 3-0.

The former India captain once again lambasted those who credited India's win more to the favourable pitches than their own calibre.

"Most of the South African dismissals were against straight deliveries. I think the South Africans were mentally defeated in the dressing room. Why can we not accept the fact South Africa are incapable of playing on Indian pitches?

"When India lose on the pacey and bouncy wickets abroad nobody blames the pitches but everyone points at our incapability to play in those conditions. Why can't we say that about the teams which come to India?" asked Gavaskar.

The 66-year-old former batsman, however, was surprised at India's margin of win. "I expected them to win but not with a 3-0 margin. Defeating the No. 1 team by that margin is just commendable effort. The way India picked themselves up after the ODI and the T20I series just shows their character," he said.

Gavaskar was also happy to see the performance of Umesh Yadav, who returned with figures of 3/9 in the second innings of the fourth Test.

"Umesh is now being able to move the ball without cutting down on pace. In the coming days he is going to be the bowler who can rattle the top-order. Together with Ishant Sharma he is going to be a force to reckon with. And after Mohammed Shami gets fit, Indian pace attack can cope in the foreign conditions pretty well," he said.

Comments
Topics mentioned in this article
Sunil Manohar Gavaskar Ravichandran Ashwin India Cricket Team South Africa Cricket Team South Africa in India Series, 2015 Cricket
Get the latest updates on IPL Auction 2023 and check out  IPL 2023 and Live Cricket Score. Like us on Facebook or follow us on Twitter for more sports updates. You can also download the NDTV Cricket app for Android or iOS.