Ravichandran Ashwin, Ravindra Jadeja Lead India's Fightback After Being Dismissed for 215 on Day 1

After Morne Morkel and Simon Harmer starred with the ball to dismiss India for 215, South Africa were reduced to 11/2 at the close of play on Day 1 of the Nagpur Test. 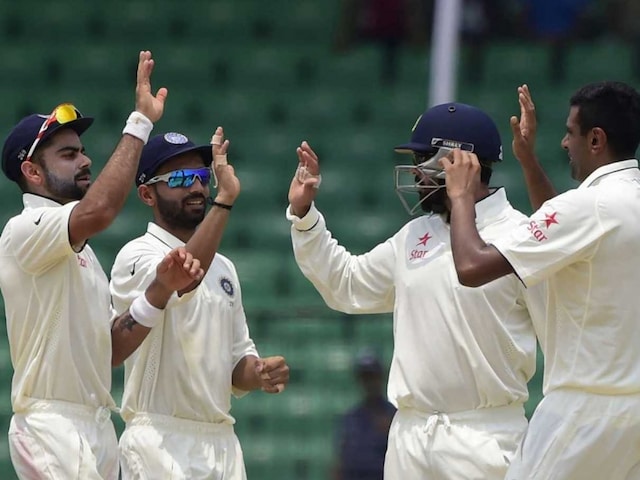 Indian batsmen capitulated meekly against both pace and spin to be shot out for 215 before hitting back at South Africa with two early scalps on day one of the third and penultimate Test on Wednesday. (SCORECARD | NEWS | VIDEOS)

The hosts, leading the series 1-0, once again fell back on their spin force to dismiss opener Stiaan van Zyl for a duck and Imran Tahir (4), who came in as a nightwatchman. (India vs South Africa 3rd Test in Jamtha, Nagpur Highlights)

Indian spinners Ravichandran Ashwin and Ravindra Jadeja, tasted early blood by plucking a wicket apiece before the visitors ended the day at 11 for two after nine overs at the Vidharba Cricket Association ground at Jamtha.

Openers Dean Elgar (7) and captain Hashim Amla (0) then ensured that there was no further damage done.Â

Earlier, on a pitch that offered plenty of turn to the spinners and reverse swing to fast bowler Morne Morkel, the Indian batsmen came a cropper after opting to bat first and were gasping at 125 for six before the tail wagged and took the total past the 200-mark.

This is the third time that India have been dismissed in the vicinity of 200 in the series, having fallen for 201 and 200 in the opening Test they won at Mohali to take a 1-0 lead.

Cheteshwar Pujara (21) and skipper Virat Kohli (22) failed to capitalise on the decent starts as India were reeling at 116-5 at one stage.

For South Africa the early damage was done by lanky pacer Morne Morkel, who grabbed a superb three for 35 in three spells before limping off the field after bowling the first ball of his fourth. His wicket-taking spells, the second and third, read 4-2-8-1 and 4-2-8-2 respectively.

Off-spinner Simon Harmer, dropped from the team in the drawn Bangalore Test after playing in the series opener at Mohali, supported him with a fine haul of four for 78, by getting good purchase off the turning track.

There were only two significant partnerships in the Indian innings - 50 between openers Vijay and Dhawan and a seventh wicket stand of 48 runs between Saha and Jadeja.

The Indian innings got off to a fine start when Vijay, who struck a six and three fours in his 84-ball knock, and Dhawan (12) put on their second successive half century stand of the series.

An opening stand on 50 runs set the innings in the morning before losing Vijay and Dhawan in the second hour to adjourn to the interval at 85 for two.

Dhawan, denied strike for long, was lured out by Elgar soon after the 50 was raised and spooned a drive back to the left arm slow bowler who accepted a return catch to his right.

The left hander's 12 came off 23 balls and was his third low score in the series after bagging a pair in the opening Test at Mohali followed by an unbeaten 45 in the rained out second game at Bengaluru.

Morkel, Harmer Do the Damage 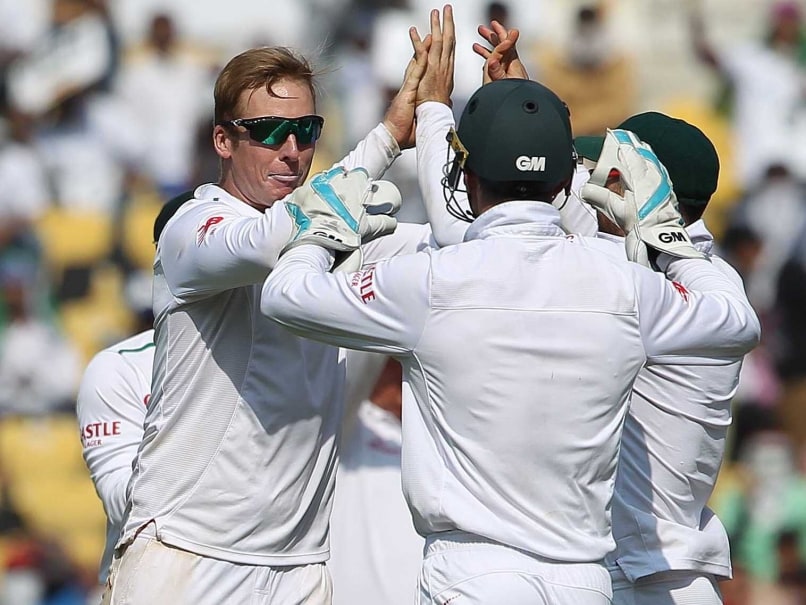 Off-spinner Simon HarmerÂ  was the pick of the South African bowlers taking 4 wickets for 78 runs during the third Test against India in Nagpur.

South Africa, then, hit back strongly through Morkel in the first hour post lunch.

The loss of both the batsmen in the second hour before lunch followed by a dramatic post-lunch middle-order collapse undid the initial good work.

The batsmen dismissed, mostly to poor shots, were Pujara (21), skipper Virat Kohli (22), Ajinkya Rahane (13) and Rohit Sharma, who did not play in the first two Tests.

In the space of 15 overs after lunch India lost four wickets for the addition of only 31 runs after being 95 for two -- Morkel and Harmer doing the damage.

Morkel, who got rid of Vijay in the first session, added the wickets of Kohli and Rahane to his kitty in a fiery third spell of 4-2-8-2.

Pujara was taken out by off spinner Simon Harmer who trapped him leg before and later got rid of a struggling Rohit Sharama (2) as India slumped to 125 for 6 from 50 for no loss in 32.2 overs on either side of lunch and then made a recovery of sorts.

Jadeja, who came in at the fall of Rohit, played some attacking shots against the spinners before he throwing his wicket away with a wild heave off Rabada in his brisk 73-minute knock that contained six fours.

But South Africa suffered a major blow when their main pace bowler in the game, Morkel, limped off the field after bowling the first ball of his fourth spell -- 17th over to be precise.

India's last four wickets added 90 runs to pull them out of a deep hole.

When South Africa replied, Ravichandran Ashwin again opened the bowling and sent back left hander van Zyl with a sharply turning ball that caught the edge and was pouched by slip fielder Ajinkya Rahane.

Tahir, who narrowly escaped a stumping appeal off Ashwin, was then bowled comprehensively by Jadeja as he played back to a ball that straightened after pitching and hit the off stump.

A tantalising day's play is on the cards on Thursday.