Lokesh Rahul and Naman Ojha's half-centuries help Board President's XI notch up 296 against South Africans on the first day of the warm-up game. South Africans 46 for two in reply 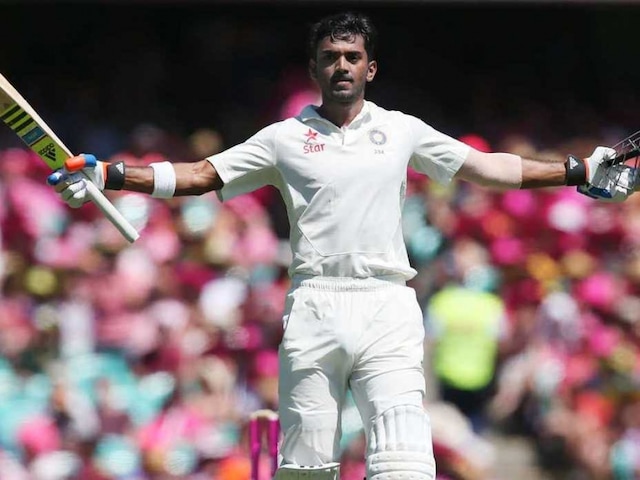 Lokesh Rahul enhanced his case for inclusion in India's first Test XI with a composed half century, guiding Board President's XI past a difficult period on day one of the two-day practice game against visiting South Africa here on Friday. (Read more India-South Africa series story here)

Watched by selector Syed Saba Karim, Rahul showed plenty of grit against the top class South African new ball attack before opening out to play some pleasing shots and make 72 in a stay of 292 minutes at the Brabourne Stadium. (Board President's XI vs South Africans: Highlights)

Rahul, who struck 13 fours in 132 balls and stood up to the new ball well, steered BP XI out of the rut with a partnership of 105 runs for the third wicket with Karnataka teammate Karun Nair, who scored 44 in 108 minutes' stay.

Wicketkeeper Naman Ojha later feasted on the spinners while making 52 in 110 minutes with 7 fours and a six before he was dismissed by Dale Steyn for his third wicket when the fast bowler came back for his third spell, after tea.

Hardik Pandya (47) used the long handle later to smack 3 sixes and 6 fours before giving off spinner Simon Harmer the second of his three wickets for the innings and then Board XI were all out for 296 in 78.5 overs, just before the second new ball became due.

In the remaining time, the visiting openers Stiaan van Zyl (18) and Dean Elgar (18 not out) made a brisk start of 38 before the former was dismissed by Shardul Thakur.

Thakur then sent back night watchman Harmer (4) in the last over to leave the visitors at 46 for 2 at stumps. The Mumbai medium pacer finished with 2 for 28.

In the morning, after opting to bat the home team plunged into trouble when opener Unmukt Chand poked at the fifth ball from Steyn that swung away and edged to the slip cordon.

Board XI captain Cheteshwar Pujara, also fighting to get into the final XI for the opening Test commencing at Mohali on November 5, was the next to go, edging the other new ball bowler, Vernon Philander, to gully for 5 after a stay of 23 minutes.

And when Shreyas Iyer was beaten for pace by Steyn to be caught behind for 9 by a diving wicketkeeper Dane Vilas, the innings was wobbling at 27 for 3 by the 9th over and Steyn's fiery first spell was a very impressive 5-1-13-2.

The dire situation called for some cautious approach against the potent pace battery of South Africa to survive and rebuild and Board XI found the men in Rahul and Nair to do the job.

The two, edging a few balls, saw off the two opening bowlers while exercising caution against Steyn, Phialander and the lanky Morne Morkel, who did not concede a run in his five overs bowled in two spells.

Nair played two excellent front foot cover drives off Kagiso Rabada in an over before lunch to show his intent, and then both the batsmen played the spin bowlers comfortably to take Board XI to 100 for 3 at lunch.

The duo played some streaky shots for fours against Steyn and Philander soon after lunch - one of those also helping Rahul to reach his 50 in 92 balls and 139 minutes with 10 fours.

It was then no surprise to see Nair soon edging a ball from Philander to Vilas behind the wicket and end the fourth wicket partnership.

Rahul was lucky to edge Steyn twice for boundaries before spinners came on to relieve the pace bowlers. Eager to make the most of this opportunity, he top-edged a slog sweep to fine leg to give Harmer, who is likely to play at Mohali, his fourth wicket of the innings.

Ojha and Jackson made merry against the slower bowlers till tea when the score read 208 for 5 before falling in the first half hour after resumption.

Jackson was caught by Steyn off leg spinner Imran Tahir and then Ojha, who faced 80 balls in a 110-minute essay, edged to the slip cordon when Steyn (3 for 46) came back for his third spell to leave Board XI at 226 for 7.

Philander too showed his potency by dismissing Pujara and Nair for figures of 2 for 37. Harmer was the most successful spin bowler with figures of 3 for 41.

Both teams had decided to utilise all the members of the squad in the morning.

Comments
Topics mentioned in this article
Lokesh Rahul Naman Ojha South Africa in India Series, 2015 Cricket
Get the latest Cricket news, check out the India cricket schedule, Cricket live score . Like us on Facebook or follow us on Twitter for more sports updates. You can also download the NDTV Cricket app for Android or iOS.