JP Duminy's unbeaten 68 and his 105-run stand for the fourth wicket with Farhaan Behardien helped South Africa clinch victory in a high-scoring T20I against India in Dharamsala. 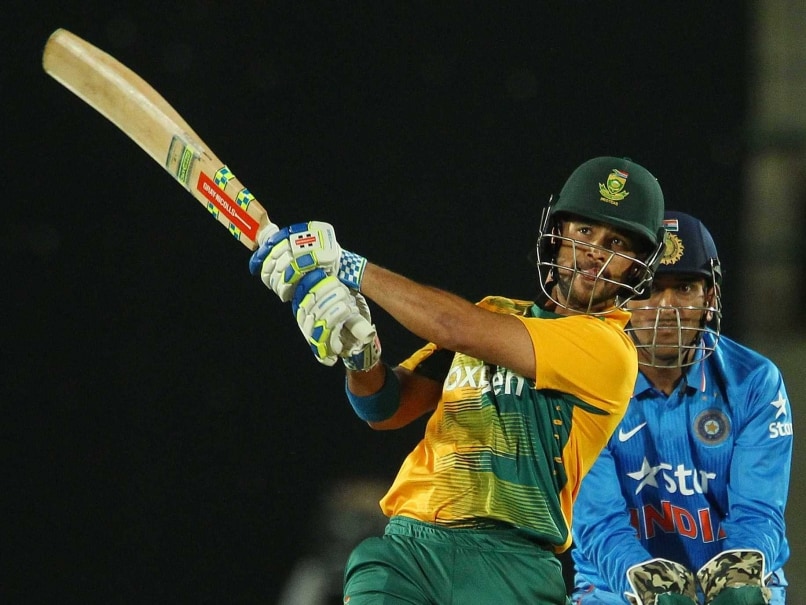 JP Duminy had smashed a fifty in the warm-up game and he continued his rich form in the T20I in Dharamsala.© BCCI
Dharamsala:

South Africa's JP Duminy said his unbeaten knock of 68 was one of his best knocks ever, as the visitors beat India by seven wickets in the first T20 international in Dharamsala. Duminy and Farhaan Behardien put on an unbeaten partnership of 105 runs for the fourth wicket to steer South Africa home chasing a stiff target of 200. (Faf du Plessis Praises Bowler's Efforts in the Death)

"Definitely one of my best innings. The way we started the innings was what we wanted in the chase. We batted quite well in the middle and built a good partnership with fudge(Behardien). We both said we have to take it on, we don't want to die wondering towards the end," Duminy said at the post-match presentation ceremony. (MATCH REPORT)

"The start was crucial for us. I think the key was that we did not lose wickets in the six overs. And the way AB and Hash (Amla) played was exceptional. The turning point was the 16th over. We tried to find a big over and that was 16th," Duminy said. Axar was smashed for three sixes as the Proteas needed just 10 runs of the last over which was bowled by left-arm pacer Sreenath Aravind.

After a few good deliveries in the block-hole, Aravind missed his line and Duminy clobbered him into the stands for a huge six, thus killing off the contest.

"We knew if we could get it down to 10-11 off the last over, we had a good chance. Fortunately enough, the left-armer missed his lengths and gave me an opportunity. It's a long tour for us but we have started well and we are happy with this performance," he said.

Comments
Topics mentioned in this article
South Africa in India Series, 2015 South Africa Cricket Team JP Duminy Farhaan Behardien Cricket
Get the latest updates on IPL 2021, IPL Points Table , IPL Schedule 2021 , live score . Like us on Facebook or follow us on Twitter for more sports updates. You can also download the NDTV Cricket app for Android or iOS.