Simon Harmer picked up four for 78 and, in tandem with fast bowler Morne Morkel (3-35), helped South Africa pack off India for a first innings score of 215. In reply, the visitors were 11 for two in nine overs at stumps on Day One of the Nagpur Test. 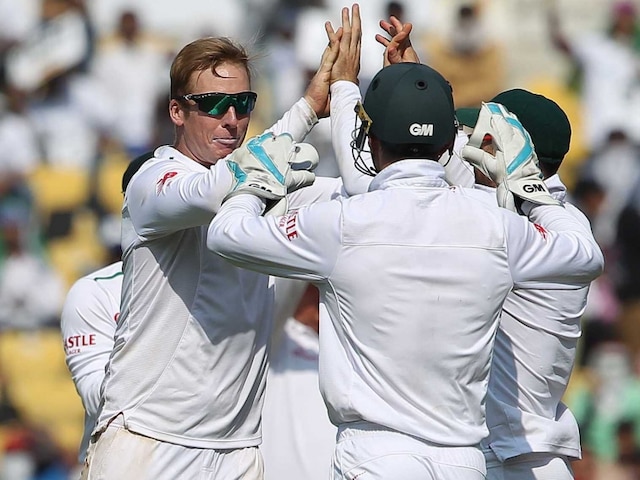 With the debate on cricket pitches refusing to die down after the three-day finish in Mohali, South African off-spinner Simon Harmer echoed India's batting coach Sanjay Bangar's views by saying that Test match wickets are nowadays prepared to get results.

"I don't think the wickets are prepared to last five full days. The reason behind the preparation of the wickets is to get a result. (Day 1 Report | Highlights)

"When the Indian team comes to South Africa, we are going to prepare wickets that suit our bowlers. So them playing one seamer, it's clear to see what sort of wicket they are preparing," said Harmer after Day one of the third and penultimate Test between India and South Africa. (Sanjay Bangar Defends Spinning Track, Calls it Result-Oriented Pitch)

Harmer picked up four for 78 and, in tandem with fast bowler Morne Morkel (3-35), helped South Africa pack off India for a first innings score of 215 in 78.2 overs. In reply, the visitors were 11 for two in 9 overs at stumps on Day One. (Kohli's Stance, Balance Faulty, Says Gavaskar)

Bangar had also defended the wicket prepared for the contest by saying that it was a result-oriented wicket, which was the same for both teams.

Harmer said he took some time before getting the right speed to bowl, which he said was a bit faster than normal.

"Obviously you can't bowl one pace the whole time. But I felt that with the quicker pace there was a bit more bite off the wicket. You saw a few balls spit. As a spinner that is what you are looking for," said the off-spinner who got rid of Cheteshwar Pujara, Rohit Sharma, Wriddhiman Saha and Amit Mishra.

"When you bowl too slowly, a batsman can adjust and go back easily. Ideally, you want a batsman to commit to a shot and I felt the best way to do that was to bowl at a quicker pace," he explained.

Harmer said the first Test pitch at Mohali was of similar nature to this one here at the Vidharbha Cricket Association Stadium in Jamtha.

"Mohali was much of the same and at the end of the day, there are three innings left. It is going to be the same for our batters and for both teams throughout the Test match. It is challenging conditions but that's what playing in the sub-continent is all about."

He said he came to know that he would play after being left out of the second rained out Test at Bengaluru only on Sunday.

"On Sunday, it was still three days away. You wanted to give it some time. So Russell (Domingo) chatted to me late yesterday afternoon and told me that I was playing."

He explained that the key to bowling here was not to try too hard for success.

"As a spinner, bowling here, the seamers are going to reverse a bit. The spinners will come into the game. I think the biggest thing is not trying too hard and I think there were stages today when I did, and that's when I started leaking runs. But its just about finding a rhythm, a line and length that works and the pace.

"It's about keeping the batsmen thinking the whole time with field placements, your speed. I think that's the biggest thing."

Comments
Topics mentioned in this article
India Cricket Team South Africa Cricket Team Simon Ross Harmer Sanjay Bangar South Africa in India Series, 2015 Cricket
Get the latest Cricket news, check out the India cricket schedule, Cricket live score . Like us on Facebook or follow us on Twitter for more sports updates. You can also download the NDTV Cricket app for Android or iOS.