India were shot out for 215 with the spin-pace combo of Simon Harmer (4/78) and Morne Morkel (3/35) being the wreckers-in-chief. In reply, South Africa were also in spot of bother, reduced to 11/2 at stumps on Day 1 of the Nagpur Test. 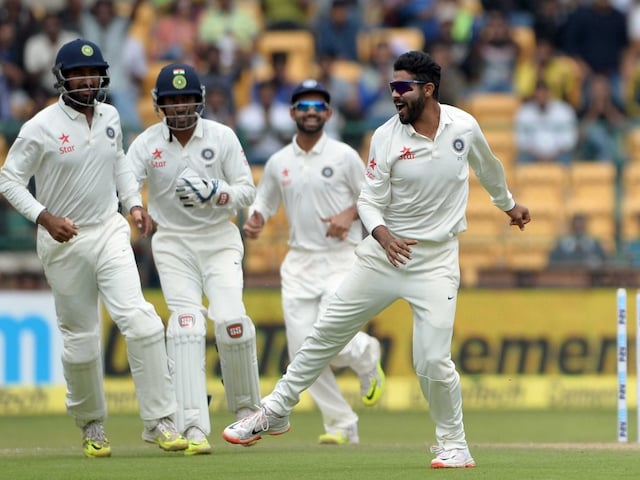 Refusing to blame the pitch for India's slipshod batting performance on the opening day, coach Sanjay Bangar said the hosts paid for a few errors of judgement on a challenging and "result-oriented wicket" for the third cricket Test against South Africa here on Wednesday

India were shot out for 215 with the spin-pace combo of Simon Harmer (4/78) and Morne Morkel (3/35) being the wreckers-in-chief. In reply, South Africa were also in spot of bother, reduced to 11/2 at stumps. (Day 1 Report | Highlights)

"It's definitely a result-oriented wicket which is equally challenging for both sides. Whichever side adjusts to it (better) will end up with a chance of winning the game," said Bangar at the end of day one in the penultimate game of the four-match rubber.

Though the Indian batting effort lasted just 78.2 overs, and the highest score was an innings of 40 from in-form opener Murali Vijay, Bangar said all his batsmen applied themselves to the hard task.

"All our batsmen applied themselves well. But when the wicket is slightly challenging there are likely to be errors in judgement. It's all part of the game." (Kohli's Stance, Balance Faulty, Says Gavaskar)

India, leading the series 1-0, hit back after being bowled out cheaply, by dismissing two visiting team's batsmen with only 4 runs on the board and there's every likelihood of the game not lasting even four days, let alone five.

He further said in defense of the hosts' tactics in the series that teams visiting the Indian sub-continent should expect such conditions.

"It's a very challenging wicket to score. This has been a low scoring series and we have to accept that," he said.

"Patience is a very important virtue here while playing the spinning ball, trusting your defense, getting to pitch, using the depth of the crease or using the feet. You saw all our batsmen played a lot of balls during the innings," added the former Test player when asked how one should bat on such sharply turning surfaces.

While praising wicket-keeper Wriddhiman Saha, who made the third-highest score of 32 and put on 48 valuable runs with Ravindra Jadeja (34), Bangar also backed Rohit Sharma who struggled to score 2 runs in 39 balls.

"What works in Saha's favour is that he has got loads of first class experience. He's played for 7-8 seasons, scored 4000 runs. He puts a price tag on his wicket. He's a very good utility player. You saw today the substantial contribution he made with Jadeja which was really crucial for crossing 200," Bangar said.

"In the previous two Tests (that) he played, he has given good contributions to the Indian team. When we won two Tests in Sri Lanka, Rohit scored. Because of the team composition he could not find place in the first two Tests. It's just one innings. We have to give him more chances and then see," he added defending Sharma.

"It was a really smart adjustment by Morne Morkel as far as length is concerned because in the first session he was dragging his length back which is his normal length. What we noticed in the second session is that he pushed his length higher and that is something for a challenge for our batsmen and we are already thinking about it."

Morkel took all his wickets when the ball was reversing on either side of lunch, before limping off the ground because of cramps when he came on for his fourth spell. His wickets were those of Vijay, skipper Virat Kohli and Ajinkya Rahane in the space of 31 balls.

"What happens when ball starts to reverse is batsmen tend to expect the ball to come into the pads and play outside the line. That's what happened to Virat (Kohli). The slow nature of the wicket, not many runs can be scored in front and because of pressure to score there is error in judgment," he added.