JP Duminy has said despite South Africa's Twenty20 series win, the ODI series will be a different proposition altogether and India will come hard at them. 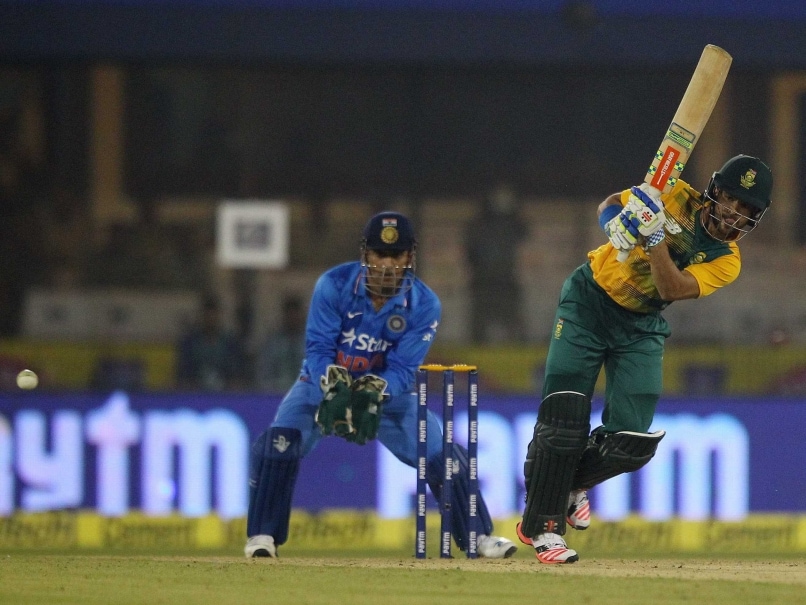 JP Duminy played a vital part in South Africa's T20I series win but he was warned his team that the ODIs will be a lot tougher.© BCCI
Kolkata:

South Africa may have clinched the Twenty20 series quite comprehensively but their star batsman batsman JP Duminy feels the Indians will fight back strongly in the upcoming ODIs and make sure that his side does not have it easy. (MS Dhoni Wants Spinner-Friendly Pitches for ODI Series)

South Africa defeated India in Dharamsala and Cuttack to clinch the Twenty20 series 2-0 after the third and final match was abandoned owing to a wet outfield. (Third Twenty20I Abandoned Due to Wet Outfield)

"As a team, we definitely expect them to put in a big performance in the two series. We are under no illusion that it is going to be a walkover in the ODI series. We know that we have to fight hard and play well and take it one game at a time," Duminy, who was adjudged man of the series, told a news conference after yesterday's washout. (Indian Team Will be Stronger Unit by 2016 World Twenty20: Ravi Shastri)

The ODI leg is beginning with Kanpur in two days time and Duminy said his side would once again look to make a strong start. (Virat Kohli Says South Africa Series Loss a Blessing in Disguise)

India had set up a mammoth 200 target in Dharamsala riding on Rohit Sharma's maiden century but his effort was overshadowed by the Duminy's unbeaten 68 that fashioned a thrilling seven-wicket for the visitors.

"I would definitely put it down as one of my better innings, especially in International cricket in the shorter format. But I still believe that there is a lot more to come from myself and I can still contribute a lot more; not only with the bat but also with the ball. I guess the key for me is to stay hungry to perform," the South African all-rounder said.

"We spoke long and hard coming here... It can get quite painful if you start off in the wrong fashion. We are happy the way we have started but we also know that there is a lot of hard work ahead of us," Duminy said.

South African pace department, with the comeback of fit-again Albie Morkel, has been a big positive for the visitors.

"We knew going into the second game that we needed to improve as a bowling unit. That was a big plus for us; the way we bowled, the discipline we showed within our bowling department," Duminy said.

South Africa had a month's break after beating World Cup runners-up New Zealand 2-1 in the ODI series and drawing 1-1 in T20Is in a home series and Duminy said it was great to get back and press the refresh button.

"Coming here most of the guys were pretty fresh and excited to be playing cricket again. Leading up to that week before that first game, we knew that it was important the way we started. If we can compete for the majority of the game, we give ourselves a good chance of coming out on top."

Asked what makes the Proteas good travellers, Duminy said it's about enjoying each others' company and success.

"It doesn't matter which part of the world we are in. No matter what challenges we face, we face it head on. There are not too many arguments going on in the team room. We find ways of enjoying ourselves in a long tour.

"It can get you down at times; so it is important that we gel as a unit and gel as a team. We have got a great camaraderie within the team and everybody plays for one another. Everybody wants each other to do well and we enjoy each others' success. That is an important component for a successful team," Duminy said.

Comments
Topics mentioned in this article
JP Duminy South Africa Cricket Team India Cricket Team Albie Morkel South Africa in India Series, 2015 Green Park, Kanpur Cricket
Get the latest updates on IND vs NZ 2021, check out the Schedule and Live Score . Like us on Facebook or follow us on Twitter for more sports updates. You can also download the NDTV Cricket app for Android or iOS.