Former India opener Sunil Gavaskar believed that the seventh-wicket partnership between Wriddhiman Saha and Ravindra Jadeja could turn out be a crucial one for the hosts in an otherwise disappointing batting display. 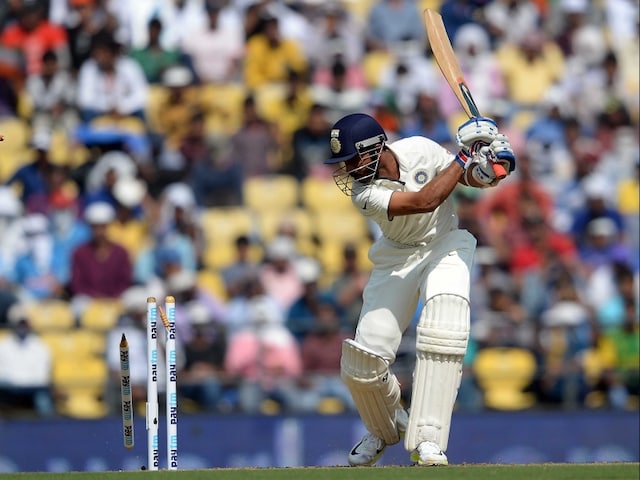 India's Ajinkya Rahane is clean bowled out during play on the first day of the third Test match against South Africa at The Vidarbha Cricket Association Stadium.© AFP

Former India skipper Sunil Gavaskar, on Wednesday, criticised India's batting order for another flop show after they were dismissed for just 215 on the opening day of the third Test in Nagpur.Â (SCORECARDÂ |Â NEWSÂ |Â VIDEOS)

South Africa's spin-pace combination of Simon Harmer and Morne Morkel had given the visitors the edge, before India's spin duo of Ravichandran Ashwin and Ravindra Jadeja made early inroads to reduce them to 11/2 at stumps. (Virat Kohli's Stance, Balance Faulty: Sunil Gavaskar)

"They were below par (Indian top order). Yes there were couple of top-class deliveries - the delivery that got Murali Vijay was a terrific delivery. But you would have to say that most of the other batsmen got out playing shots which showed that may be they were not confident," said Gavaskar.

"When you are confident you tend to let go off deliveries as well. Unfortunately, not a lot of Indians apart from (Murali) Vijay are amongst the runs and that's why he such a good leaver of the ball," he added.

When quizzed about whether India's total was a decent one, Gavaskar was of the view that 215 was a par score on a difficult batting track at the Vidharbha Cricket Stadium. (India vs South Africa: Simon Harmer Backs Result-Driven Wickets)

"The 215 is a good score, it's a pretty handy score because it's not an easy pitch to bat on.

"Day 1 and day 2 are generally days when the pitch is a lot easier to bat. But my honest advice to all those who think that India's first innings score is equivalent to 400, perhaps that's not the case.

The former India opener also felt that the seventh-wicket partnership of 48 runs between Wriddhiman Saha and Ravindra Jadeja could, in the end, turnout be a crucial one.

"The partnership between Saha and Jadeja is so crucial because it got India those extra runs, otherwise India could have been dismissed for 175," he added.

Gavaskar also cautioned the South Africans to play sensibly on the Jamtha track and the likes of Hashim Amla, JP Duminy and Faf du Plessis would have to compliment the in-form AB de Villiers.

"Their batting has not been in great form apart from AB de Villiers. So much will depend on Hashim Amla, JP Duminy and Faf du Plessis. If they can support AB de Villiers and show the determination that Dean Elgar shows then South Africa will be able to get close to India's total.

"What South Africa needs to do, is to ensure that they don't have to chase too many in the second innings. Which means they will have to bat sensibly and take a lead and then try and dismiss India cheaply in the second innings because batting fourth is going to be pretty impossible," said the 66-year-old.