Flare-Ups in Sri Lanka Thing of Past, Says Ishant Sharma

Ishant Sharma was involved in an ugly on-field spat with several Sri Lankan players during India's Test tour of the Island Nation. He was banned for one match following the incident. 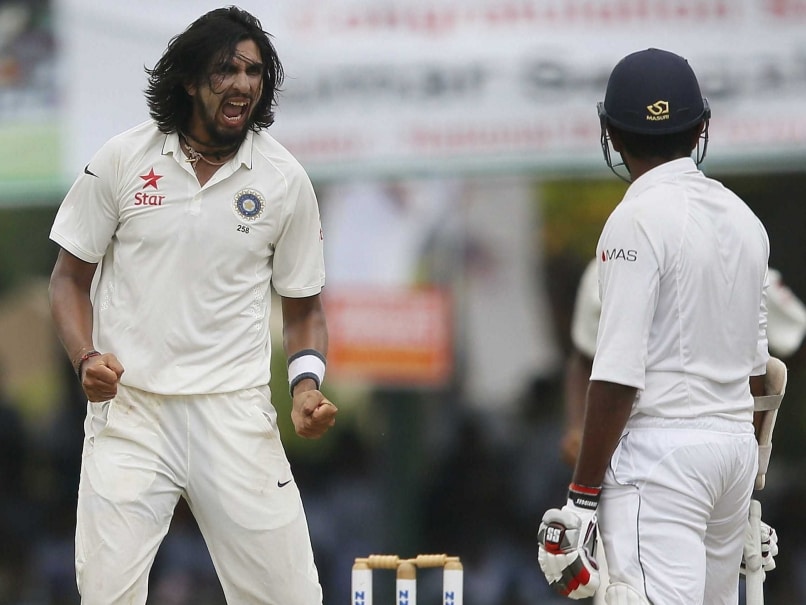 Ishant Sharma was criticised by several former cricketers for his outbursts during India's Test tour of Sri Lanka.© Reuters
Bangalore:

Not the least bit concerned about the storm he kicked off due to an overtly aggressive demeanour during the Sri Lanka tour, Indian pacer Ishant Sharma says he does not even think about the outburst which led to a one-match ban on him.

Back in the team after serving the suspension in the opening Test against South Africa in Mohali, Ishant said he prefers to look ahead instead of dwelling on whether he could have done anything differently in Sri Lanka.

"Many times in life we look back and think of a moment in the past, and wonder, 'If I had done this or not done that, would things have been different'? There is no answer to that. When I got banned for the Mohali Test, I decided I would not look back and wonder about what would or could have happened. What happened in Sri Lanka is the thing of the past, and I prefer not to think about it," Ishant told bcci.tv.

The pacer was criticised by several former cricketers for his outbursts during the tour with the showdown with Dhammika Prasad catching the most attention.

"Dhammika Prasad was bowling bouncers to me. In an over you can only bowl two, but he bowled a third one. I knew that he was doing it because he got hit on his hand off my bowling earlier. Anyway, when he bowled a third bouncer, it did not come up," he recalled.

"So, I just told him, 'You are too slow to hit me on the helmet'. He got offended and other Sri Lankan players got involved too. Things heated up from there and got carried on when I came on to bowl.

"As a fast bowler, you need to do something to charge you up and spur you on to achieve something special. It was that moment for me. I know many people believe what I did was very wrong because I got banned (for one Test). I did not get banned because of my spat with Prasad, which everyone was criticising me for. I got banned because I celebrated in the batsman's face after getting him out. That is not allowed. It was the heat of the moment," he asserted.

Talking about the changes he has made to his technique to become a better bowler, Ishant said he has primarily focussed on bowling more and a shorter run-up.

"I haven't done much work on my bowling, just increased my bowling load. Everyone says that pacers will not get wickets in Asia and it is all about the spinners. But there are phases when nothing is happening and wickets are not coming easily. That's when as a fast bowler you have to say, 'I will get a wicket for my captain'. For that you need self-belief. I got that from increasing my workload," he said.

"I shortened my run-up a bit because when I used to run, I didn't feel free. There was something missing. I was also bowling a lot of no-balls. After I shortened it a bit, I started feeling more free and the number of no-balls too went down. When you feel comfortable in your run-up, your bowling rhythm automatically improves," Ishant elaborated.

The lanky bowler said he is also working hard on his batting.

"I may not be a proper batsman, but when I am batting out there for my team, I have enough courage to not give away my wicket out of fear. I would not like seeing myself in the mirror if I did that. When I have a bat in my hand, it is my job to try my best to survive out there. I know I will get out; everyone gets out in the end. But I will not go without putting up a fight," he said.

Talking about the overall growth of the team, Ishant said the Indians are a rapidly-improving bunch and on their way to becoming a strong unit.

"The best thing is that we believe in each other. I know it has been said many times before and it is a standard thing to say. But that is really the case with this team. We back each other, encourage each other," he said.

"Everyone has their families visit them on tours, but the 15 boys in the squad, we are each other's first family. I have goosebumps right now, as I say these words to you. It is true. We are all together and have each other's back at all times. If we lose, we all go down together, if we win, we move up together," he added.