While no one has belittled Virat Kohli's achievement as a skipper in the recent series win over world number one side South Africa, the Indian media had merely pointed out that the win would have been even more memorable had it been played on better pitches. 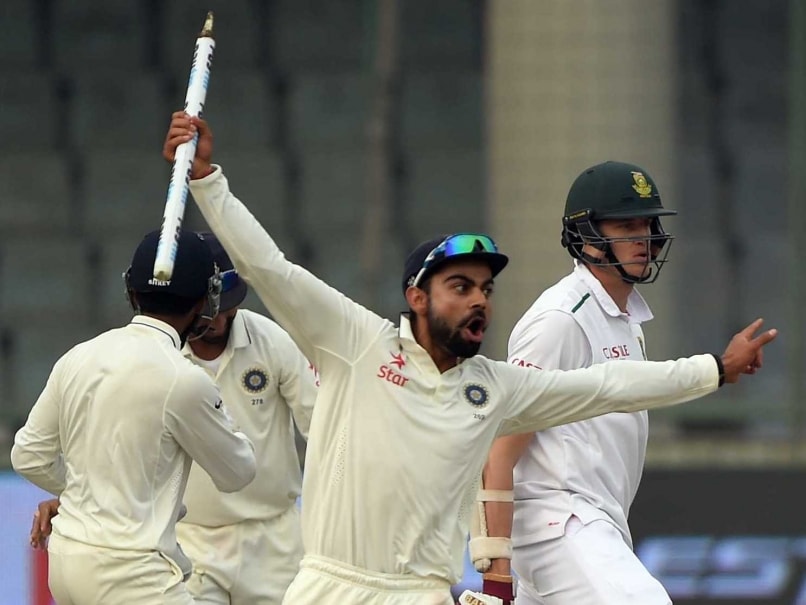 Virat Kohli Kohli feels that what is written, spoken and analysed in the media is taken as Gospel by the fans and if things were projected negatively, then the players suffer.© AFP

If Virat Kohli keeps harping on "unfair criticism" of the dicey pitches on which his Indian team won the Test series 3-0, he is unwittingly admitting that there is some truth in what critics say.Â (India Conquer South Africa at Kotla; Ravichandran Ashwin, Umesh Yadav Help Win Series 3-0)

Right through the four-match series against South Africa, the Indian captain seemed visibly unhappy with the media not giving enough credit to his young team beating the world's No.1 team.

No one has belittled the victory, coming as it did against a team hailed as the best travellers who did not lose a series overseas for almost a decade. It was only pointed out that if the matches were played on slightly better pitches, the enjoyment for both the teams and the fans would have been more instead of making it feel pyrrhic and blurring the big picture of Indian cricket.

For a year and half or so, a sense of deja vu will prevail as India will be playing much of its international cricket at home. Imagine, if the fortunes reverse like it happened when India went without a victory in eight overseas Tests against England and Australia not so long ago, the depressing scenario. (Nothing Poor About India's Pitches: Livid Virat Kohli Takes a Dig at International Cricket Council)

Will the cycle of winning at home and losing overseas continue?

To be fair to Kohli, he has shown lot spunk as captain and his young teammates rallied around him to raise a hope that things can change in the coming years.

After the South Africa series, Kohli has somewhat modified his line of attack, saying people are finding new ways to criticise his team when it is winning. He is particularly miffed with some former players whom the younger players looked up to while growing up.

He reserved his harshest for the media: "Someone who hasn't played for the country has no right to comment on an international cricketer anyway. I don't think that has any kind of logic. You cannot sit there and say how you would have done something differently when you have not been in that situation yourself and don't have the mindset of a cricketer."

It surely is a below-the-belt strike.

His grouse is that that the series was played at home and people here were out looking for weaknesses and finding ways to criticise, failing to notice the kind of good cricket the team played.Â (Ravichandran Ashwin's Twitter Jibe at Australian Pace Legend)

Kohli predictably took shelter under stats, pointing out that the top five run-getters and the top two bowlers were Indians, without mentioning that it was in a low-scoring series.

As for former cricketers, he is a little conciliatory in tone. He says he is hurt seeing the people he has grown up watching and admiring going hammer and tongs at his players.

Kohli feels that what is written, spoken and analysed in the media is taken as Gospel by the fans and if things were projected negatively, then the players suffer. It is not difficult to know what he was hinting at and he was clearly trying to protect his teammates like a good leader.

Some of his comments are as flippant as any, coming from any captain. He is not the first one to rant. To say that only those who played international cricket understands the pressures doesn't merit a reply. He spoke like his team director who soon endorsed his protege's ability to turn things around. Both have been promoting each other ever since they go together.

Kohli is not the first captain to undermine critics. Some of his predecessors also tried to put the media in their place, almost saying they should only report the game on the basis of the scoreboard and not air their critical appreciation on a highly skilled sport!

One captain, perhaps the first Indian to start writing a regular column in a magazine and who now sits in the commentary box, questioned a highly respected cricket writer's competence to comment on missed catches in the slips by wondering whether the journalist ever stood in the slips and took a catch!

Then there was that classic by a garrulous skipper who asked a passionate cricket writer what did he know about cricket. He used the same line to tick off all those who didn't agree with him. At last one reporter gave it back, saying he had played a fairly good grade of cricket to sit in judgment on what's happening out in the middle!

Another worthy couldn't take criticism by one of the greatest India captains and cheekily stated that his predecessor was far removed from modern day cricket and didn't understand the rigours of the game.

A lot of players seriously think that the job of the media is to faithfully reproduce what they say without questioning and they are happy as long as their game is not dissected or their form questioned.

Modern sportspersons are so fond of their face and voice, they would only like to be projected as they would like it, failing which "no interviews, please."

No one will thus risk annoying an Indian captain!

Comments
Topics mentioned in this article
Virat Kohli South Africa Cricket Team India Cricket Team South Africa in India Series, 2015 Cricket
Get the latest updates on IND vs NZ 2021, check out the Schedule and Live Score . Like us on Facebook or follow us on Twitter for more sports updates. You can also download the NDTV Cricket app for Android or iOS.