Shreyas Iyer left his India teammate Mohammed Siraj completely bewildered after performing a magic trick with a deck of cards. 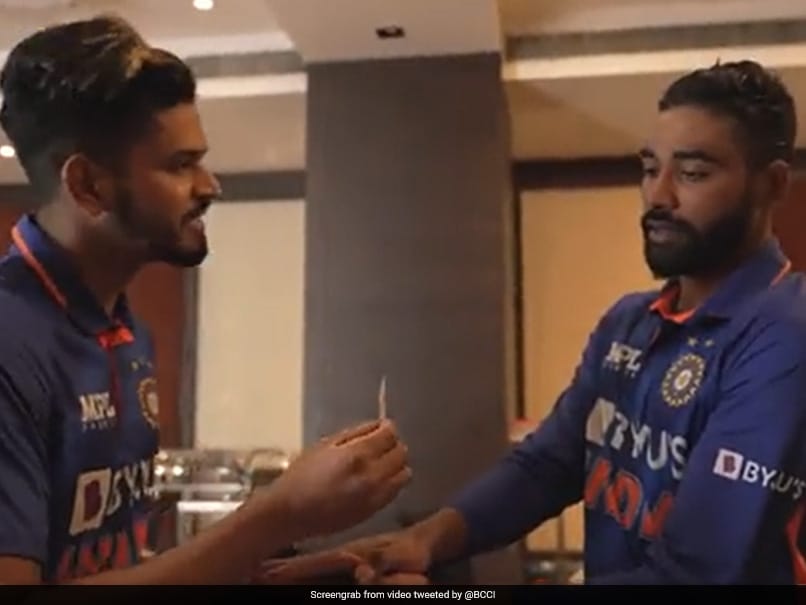 Other than his batting skills, Shreyas Iyer has another talent too and that is magic. In a video posted by the BCCI on social media, Iyer performed a card trick for Mohammed Siraj, who was left utterly stunned by what had transpired. In the video, the Delhi Capitals (DC) player asked Siraj to choose a card from the deck. Iyer also asked him to show the card to Ruturaj Gaikwad, the camera and also to himself. The 26-year-old then sandwiched the card in Siraj's hands.

He, then, magically replaced it with another card (a Joker), leaving the Royal Challengers Bangalore (RCB) bowler completely dumbfounded.

Hailing Iyer for his magic trick, the BCCI captioned the video as, "Weaving some magic with a deck of cards & blowing everyone's minds How's this card trick from @ShreyasIyer15 that got @mdsirajofficial stunned!"

Weaving some magic with a deck of cards & blowing everyone's minds

The duo were part of India squad for the home T20I series against New Zealand. After a disappointing T20 World Cup exit, India bounced back to winning ways as they sealed a 3-0 clean sweep against the Blackcaps.

It also marked a winning start to Rohit Sharma's full-time captaincy tenure. It was also a good start for Rahul Dravid, who replaced Ravi Shastri as head coach of Team India after the World Cup.

India crashed out of the Super 12 stage at the T20 World Cup, suffering defeats to Pakistan and New Zealand.

After the culmination of the T20I series, India and New Zealand will now face each other in a two-match Test series, starting from Thursday.

New Zealand Cricket Team Ruturaj Gaikwad Mohammed Siraj Shreyas Iyer India vs New Zealand 2021 Cricket
Get the latest updates on ICC Women's Cricket World Cup 2022 and IPL 2022, check out the Schedule , Live Score and IPL Points Table. Like us on Facebook or follow us on Twitter for more sports updates. You can also download the NDTV Cricket app for Android or iOS.