Sri Lanka managed to combine an aggressive bowling attack with ruthless batting to annihilate India by 9 wickets and level the 5 match series 1-1, on Tuesday. 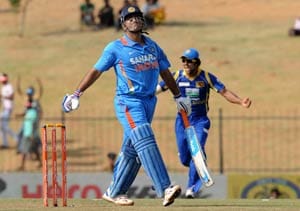 With generous help from a shockingly sub-par India, Sri Lanka came storming back into the five-match One-Day International series with a nine-wicket win in the second game in Hambantota on Tuesday.

A batting display that was so far removed from Saturday's commanding display completely negated any advantage India might have gained from MS Dhoni winning a second consecutive toss at the Mahinda Rajapaksa International Stadium. ( Also see: Match in pics)

Through a series of indiscreet strokes, India folded up for just 138 in 33.3 overs, their second lowest total on Sri Lankan soil, proving easy pickings for Sri Lanka. Upul Tharanga and Tillakaratne Dilshan, the openers, pulverised the Indian bowling on their way to a stand of 119 off only 100 deliveries, setting the platform for the big win with an extraordinary 30.1 overs to spare and leaving the series level 1-1 with three to play.

In direct contrast to the previous game when India showed great application and common sense towards the early stages, and gradually accelerated to post a total in excess of 300, Tuesday's was a timid, insipid performance which made Sri Lanka's bowling in general, and Thisara Perera and Angelo Mathews in particular, look far more threatening than they actually were.

The match was played on a different surface, with a little more grass, but it didn't necessarily help the bowlers too much by way of movement or bounce. Sri Lanka didn't need too much help from the pitch; India's top-order batting was in an obliging mood, playing strokes with the carelessness of millionaires.

Perera and Mathews, both from St Joseph's School in Colombo where they played key hands in their school's cricketing success in their formative years, extended their association to the international level, too. They kept the lines tight and the lengths immaculate, hardly giving anything away and probing the patience and commitment of the batsmen. India were found sorely wanting, too many strokes too early in the innings without getting the eye in or the feet moving a certain recipe for disaster.

There was no indication of the carnage to follow when Gautam Gambhir and Virender Sehwag began brightly. Isuru Udana, the left-arm paceman, was a bundle of nerves on debut, sending down five wides in his first over which went for 16, and after three overs, India had motored to 31 without loss.

Perera has been Mahela Jayawardene's go-to man in a season where he already has a hat-trick and two man of the match awards in five ODIs against Pakistan last month. He didn't disappoint this time either, keeping Sehwag quiet for five deliveries in his first over, then acrobatically taking a two-handed catch to his right as Sehwag's thrash skewed off the inside half of the bat.

That triggered an inexplicably injudicious sequence of strokes, which saw India lose four for 10 in 23 deliveries. Each of Perera's first three overs was a wicket maiden. In his second over, he consigned Virat Kohli to a rare failure against Sri Lanka, finding the outside edge to a lazy waft, which presented Kumar Sangakkara with the first of his four catches. ( Related read: MSD feels Kohli's wicket was the turning point) In the next, Suresh Raina poked flat-footed at a ball leaving him and dragged it on; Perera should have had another wicket two deliveries later, but Mathews put down a regulation catch at first slip as Dhoni drove optimistically. 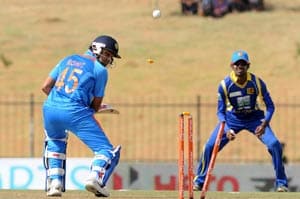 By then, Mathews had already got rid of Rohit Sharma, whose place in the XI must be under scrutiny after another casual, distant cut directed the ball on to his stumps. Only Gambhir, of the top six, all grim determination and fierce focus despite the mayhem around him, batted with any composure in making a fluent half-century. Gambhir was last man dismissed, caught brilliantly by Sangakkara, to round off an excellent stint in the park for Sri Lanka.

For the second time in three nights, Sehwag put down Dilshan at first slip when an early strike might have lifted Indian spirits. This time, Dilshan made India pay with typically outrageous strokes while Tharanga was all sinewy grace, driving crisply through the covers and down the ground and presenting a picture of orthodoxy. India's bowlers again struggled for control in the strong wind, sending down nine wides in the nine overs to the break, and 14 in all. Sri Lanka had been a lot more disciplined, Udana's five wides in his first over their only indiscretions in direction.

Zaheer Khan, Irfan Pathan and Umesh Yadav were all profligate, bowling either too short or too full and being promptly punished. It was left to R Ashwin to prevent Sri Lanka from completing their first 10-wicket win against India when he evicted Dilshan, but even that was scant consolation for the bruised Indians.