India captain Mahendra Singh Dhoni credited the fine show by his pacers and presence of part-time bowling option for his side's clinical 39-run win over Sri Lanka in the one-off Twenty20 International on Tuesday. 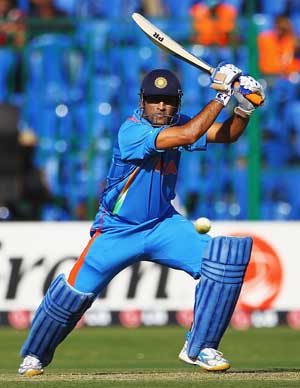 India captain Mahendra Singh Dhoni credited the fine show by his pacers and presence of part-time bowling option for his side's clinical 39-run win over Sri Lanka in the one-off Twenty20 International on Tuesday.

Pacer Ashok Dinda produced a career-best effort of four for 19 while Irfan Pathan ably supported him with three for 27.

The part-time bowlers, Virat Kohli and Rohit Sharma, also played a crucial role in slowing down the Lankan run-chase. They did not let their skipper down as the duo bowled four overs for 22 runs.

"Overall, we were really good. It was a good performance. We thought of a high scoring game but it was slightly different as the ball was swinging till the 20th over. So it was not really easy to slog. We thought we were 10-15 runs short. Especially the way Sri lankan team started, we thought that may be the case but our bowlers came back beautifully," Dhoni said at the post-match presentation ceremony.

"They bowled in the right areas. It was important to take wickets and that's what we did. The combination of Virat and Rohit was a big plus point for us. If you are looking to play with four specialist bowlers and a part-timer, they bowled well as a unit. If in four overs, they concede 30-35 runs, it's ok with us. Our strength is having that seventh batsman in the side. Quite happy with the performance," said the skipper.

Riding on Kohli's well-crafted 68, the Indians managed to put up a respectable 155 for 3. In reply, Sri Lanka were bundled out for 116 in 18 overs at the Pallekele International Cricket Stadium.

Asked about India's dominance over Sri Lanka in their home conditions, Dhoni said, "The wickets have changed here. When I first came here, the ball used to stop a lot. But now the pitches have been re-laid. I think we mastered our bowling and batting better than them."

Sri Lankan skipper Mahela Jayawardene said it's tough to come back when you commit too many mistakes against a strong team like India.

"We thought 150 was achievable. We're making a lot of mistakes. We'e still playing good cricket. When you come across a team like India, it is tough to beat them," he said. Talking about the upcoming Sri Lanka Premier League (SLPL), he said, "The SLPL should be a good preparation for the World T20."

Irfan Pathan continued his strong ODI form with another man-of-the-match performance and the Baroda pacer said he wants to contribute the way he is doing it right now.

"God has been kind to me. I want to continue my good form," he said.

"Wickets at the top of the order help. Mahela was going great guns. The ball was swinging and we knew that if we got wickets, it would be difficult for the Lankan batsmen."

Comments
Topics mentioned in this article
Cricket India Cricket Team Sri Lanka Cricket Team MS Dhoni Sri Lanka vs India 2012
Get the latest updates on IPL Auction 2023 and check out  IPL 2023 and Live Cricket Score. Like us on Facebook or follow us on Twitter for more sports updates. You can also download the NDTV Cricket app for Android or iOS.