Figures of 2-0-19-1 aren't too flattering even in a Twenty20 International, and if you are in the team primarily as a bowler, you want to either keep down the number in the third column or increase the one in the fourth. Ashok Dinda did both brilliantly in the match against Sri Lanka at Pallekele on August 7, bowling the 18th over of the innings for 0-W-0-W-0-W. 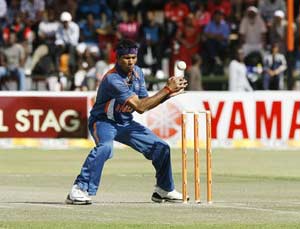 Figures of 2-0-19-1 aren't too flattering even in a Twenty20 International, and if you are in the team primarily as a bowler, you want to either keep down the number in the third column or increase the one in the fourth. Ashok Dinda did both brilliantly in the match against Sri Lanka at Pallekele on August 7, bowling the 18th over of the innings for 0-W-0-W-0-W. From 1 for 19, he finished with 4 for 19. The Sri Lankans were bowled out, and Dinda was a hero.

Dinda is a wicket-taking bowler. No one's quite sure what he does to pick wickets by the sackful, but he pulls it off. "I am an aggressive bowler and am always spoiling for a fight," he tells Wisden India. "Considering the kind of wickets we play on here in India, it's important for a fast bowler to be aggressive. One must be a fighter. Along with attacking using the ball, the body language should also state your intentions. After that, it comes down to your mental strength. I am not scared of anyone, and I never give up. If the batsman has a bat, I have the ball and have ten others on the field helping me."

Dinda has been one of the mainstays of the Bengal team on the domestic circuit and has a staunch supporter in Sourav Ganguly, the state's best-known cricketer. In fact, Ganguly has often spoken of Dinda being one for the long haul, an India prospect, though an average of 52.44 from ten One-Day Internationals doesn't quite do justice to that faith. "Dada (Ganguly) has called me India's number one bowler," says Dinda. "I wanted to prove that Dada's statements weren't wrong. But I haven't got too many opportunities. I have mostly played in the subcontinent."

But success in the shortest format of the game, coupled with an average ODI record and the presence of regulars in the Test team, might mean that Dinda will get branded as a T20 bowler. Does that worry him? "Last season, I picked up 59 wickets in the Ranji Trophy," he protests. "I have proved that I can play the longer format of the game. I want to be a bowler who does well in all formats. I hope I don't get into a situation where I am bracketed into a category. I am totally ready to play any kind of cricket."

He's more or less assured of a team in the Indian Premier League, whether or not his current employers, Pune Warriors India, stick with him or not. And now, a decent run in India's T20 team also looks assured. While Dinda wants more, he knows that he has a better chance of catching the imagination of the masses via the IPL. "Planning the dismissal of a batsman is an art, and I love doing that in longer matches," he says. "But we must play the IPL too. There's so much glamour, and also, a good performance gets the public excited. Good performances in the IPL guarantee popularity."

Comments
Topics mentioned in this article
Cricket India Cricket Team Sri Lanka Cricket Team Ashok Dinda Sri Lanka vs India 2012
Get the latest updates on IPL Auction 2023 and check out  IPL 2023 and Live Cricket Score. Like us on Facebook or follow us on Twitter for more sports updates. You can also download the NDTV Cricket app for Android or iOS.