India couldn't have asked for a better start to a demanding season. In a country where overseas teams have struggled to assert themselves, they overwhelmed Sri Lanka in both the One-Day International series and in the one-off Twenty20 International, thereby not only gathering early momentum but also regaining some of the confidence that had taken a severe beating in the last year. 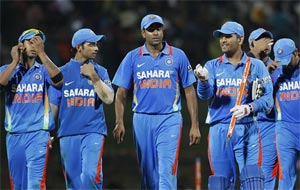 India couldn't have asked for a better start to a demanding season. In a country where overseas teams have struggled to assert themselves, they overwhelmed Sri Lanka in both the One-Day International series and in the one-off Twenty20 International, thereby not only gathering early momentum but also regaining some of the confidence that had taken a severe beating in the last year.

The season gone by was one of Indian cricket's most disheartening and disappointing. In 14 weeks in England, they didn't so much as threaten victory. On a tour of similar length of Australia, they managed just three wins in the triangular series. Both Test series were lost 0-4, the first costing them the No. 1 Test ranking. To make matters worse, India failed to qualify for the final of the Asia Cup in Dhaka. The euphoria of the World Cup triumph had well and truly evaporated, the bubble had burst.

It was, therefore, imperative for India to begin a new season, which encompasses ten Test matches at home and the World T20 in Sri Lanka next month, on a winning note. India have traditionally travelled well to Sri Lanka, especially for limited-overs cricket - they haven't lost a bilateral ODI series since 1997, though their last Test series win came in 1993 - and it was no different this time.

What was surprising was the relative lack of rust. India hadn't played internationally since late March, most players had had a rare 45-day break at the conclusion of IPL V. How quickly they would hit their straps was the big question; as they showed, India needed very little time to find their bearings, a tribute to their off-season training and a shot for fresh minds and rested bodies.

There was one inevitable meltdown, in the second ODI at Hambantota when too many batsmen attempted far too many strokes without sussing up the pitch, but otherwise, India's batting was in the pink of health. Virat Kohli was the undisputed star, with two hundreds in the ODIs, but Gautam Gambhir, Suresh Raina and Mahendra Singh Dhoni weren't far behind. Manoj Tiwary grabbed his chances when he got them, belatedly, and Virender Sehwag was good in patches, so India could afford to carry the frustratingly underachieving Rohit Sharma who must surely be running out of time.

India's successes across all formats have traditionally stemmed from the strength of their batting. In Sri Lanka, the batting didn't let the team down; it made the job of the bowlers that bit easier, and the bowling unit did just enough to build on the batting brilliance on pitches that were quite brilliant from a limited-overs perspective.

That hasn't always been the case in Sri Lanka, where tracks in the past tended to get slower and lower during the second half of a one-day game. At most venues, winning the toss was half the battle won; even totals of 225 were hard to chase down not too long back.

The square at the R Premadasa Stadium was re-laid before last year's World Cup, while Hambantota and Pallekele are relatively new centres where the pitches have settled down quite nicely. India, Dhoni insisted, had adapted to the changing surfaces better than Sri Lanka.

"The wickets have changed here," said Dhoni, whose first tour of Sri Lanka was in 2008 for the ODI series after he chose to sit out the preceding Test series. "When I first came here, the ball used to stop a lot. But now, the pitches have been re-laid. I think we mastered our bowling and batting better than them."

That's saying quite a bit, because changed pitches or not, the advantage generally rests with the home side. India outplayed Sri Lanka not just on the field, but also on the tactical and strategising fronts.

On a tour of several gains, the one man that must have delighted Dhoni and Duncan Fletcher with his allround consistency was Irfan Pathan. When Pathan is bowling well, as he did for most of this tour, he is such a handful. Because he swings the white ball a fair bit when he is on top of his bowling game, he invariably picks up early wickets. The confidence from his bowling usually rubs off on his batting; Pathan contributed with both bat and ball in the series, once again reinforcing his allround abilities and the value he can bring to the team when his mind and body are in sync.

Inconsistency has been Pathan's biggest bane, so it will be premature to state with any great certainty that he is here to stay, finally. But the signs are promising. Pathan is a rhythm and confidence cricketer; neither would have suffered over the last three weeks. If he can continue to build on his impressive start to the season, he will provide Dhoni with greater options, not merely in the limited-overs version but also in Test cricket where India will welcome the greater flexibility in team composition Pathan will facilitate.

That said, India can't - and won't - get carried away. Their next challenge is a two-Test series against New Zealand, beginning in Hyderabad on August 23, immediately after which comes the World T20. India will need to flit from one format to another very early in the season. Their adaptability will be put to test straightaway, which is not such a bad thing considering four-Test series against England and Australia aren't that far away.

Comments
Topics mentioned in this article
Cricket India Cricket Team Sri Lanka Cricket Team MS Dhoni Sri Lanka vs India 2012
Get the latest updates on IPL Auction 2023 and check out  IPL 2023 and Live Cricket Score. Like us on Facebook or follow us on Twitter for more sports updates. You can also download the NDTV Cricket app for Android or iOS.