In the single-mindedness of purpose, in making the most of one's abilities, in placing emphasis on substance rather than style, Manoj Tiwary is easily the winner. 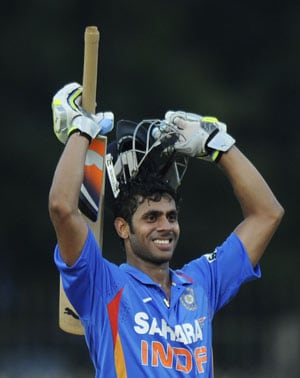 Aesthetics and success aren't mutually exclusive in international sport, but merely being gracefully talented is no guarantee that a sportsperson will court success. If that were the case, VVS Laxman would never have scored a duck, Roger Federer would never have dropped a set, Lionel Messi would have never missed a goal.

The Laxmans, the Federers and the Messis are obviously immensely gifted and put on a very attractive spectacle, but their successes in their respective fields are because they have fused their gifts with hard work, they have maximised their unquestioned talent through uncompromising work ethics.

Success, though, is not beyond the reach of the less graceful. Brad Gilbert, a limited tennis player who worked his way to as high at No. 7 in the world and who was in Andre Agassi's corner when Agassi worked his way through the Challenger circuit to reinvent himself, has put things in perspective in 'Winning Ugly', a must-read for any sportsperson aspiring to reach lofty heights.

In the grace stakes, Manoj Tiwary against Rohit Sharma would be a no-contest, an RSC in the first round. Where Tiwary is awkward, sometimes ungainly, Rohit moves with the grace of a ballerina. Tiwary is rushed into his shots, Rohit has oodles of time on his hands. Tiwary will nudge and prod and hoist and hoick the ball, Rohit will coax and cajole it into gaps with a languid elegance that can't but exhilarate.

In the single-mindedness of purpose, in making the most of one's abilities, in placing emphasis on substance rather than style, however, Tiwary is easily the winner. It's not a conclusion born out of Rohit's 13 runs in five innings in this One-Day International series in Sri Lanka, or because, in his first two games for the country since last December, Tiwary brought up his career-best figures as well as his maiden half-century. In the end, it all boils down to how badly one wants something; Tiwary obviously wants the India cap more badly than Rohit might - or at least that's how it seems.

Rohit has the unquestioned backing of the team management, he has an understanding captain, he has team-mates who genuinely believe he is the real deal with a bright future. Unfortunately, Rohit and bright future have gone hand in glove since he made his debut, five years back. Five years is a long, long time in international sport; given his skills, Rohit ought to have progressed far beyond the 'bright future' category. If he hasn't, he has no one else to blame.

Where Rohit is the connoisseur's delight, Tiwary is your average journeyman cricketer, all guts and fierce focus, steely determination and tremendous mental strength. He has played only eight ODIs in four and a half years, but he hasn't used that as an excuse. Whenever he has got the opportunity, he has looked to make the most of it. He knows by now that he is unlikely to get as long a rope as some others more fortunate, so each time he goes out, he plays as if his life depends on it.

Continued backing as well as sporadic appearances can have different impacts on the psyche of players. Some, when they know that they will get a few games on the trot, can ease off mentally, smug in the knowledge that their place in the playing XI is secure, while others can use that knowledge to play fearlessly, but not carelessly.

Players like Tiwary, who have had to scrap for their chances, can either be bogged down by the pressure of having to keep proving themselves, or feed off that pressure to keep raising the bar and make it impossible for them to be overlooked. It's not as if Rohit enjoys stacking up one failure after another, but if he is looking for peers from whom he can learn a thing or two - and not necessarily about batsmanship - he needn't look too far beyond Tiwary and Virat Kohli.

There comes a time when, no matter how talented, you have to make compromises. A Sachin Tendulkar did that, 15 years into international cricket, in the Sydney Test in 2004 when he completely took the offside out of the equation. Tendulkar had been dismissed often during the first three Tests feeling for the ball outside off; in the final Test, in a remarkable display of discipline and restraint, he hardly scored a run on the offside, yet went on to make an unbeaten 241.

What's good enough for Tendulkar ought to be more than good enough for Rohit. He could have done better on Saturday than play across the line early in his innings to Nuwan Pradeep, the same bowler who had dismissed him playing an identical stroke in the previous game. Despite scores of 5, 0, 0 and 4, the management group had reposed faith in him; it was up to Rohit to show that that faith wasn't without basis. It wasn't so much that he failed again that was galling; it was the manner of his dismissal that was disappointing.

Men who know what they are talking about have anointed Rohit the next big thing as far as Indian batting is concerned. Rohit has produced isolated pockets of brilliance, but unless he realises that you can win ugly, he could be lost quickly to international cricket. And that will be a real shame.

Comments
Topics mentioned in this article
Cricket India Cricket Team Sri Lanka Cricket Team RG Sharma IPL 2013 West Indies vs India 2011 Sri Lanka vs India 2012
Get the latest updates on ICC T20 Worldcup 2022 and CWG 2022 check out the Schedule, Live Score and Medals Tally. Like us on Facebook or follow us on Twitter for more sports updates. You can also download the NDTV Cricket app for Android or iOS.