India beat Sri Lanka to go 2-1 up in series

Until Suresh Raina exploded in a flurry of strokes, Sri Lanka, driven by experience and buoyed by youthful exuberance, seemed to have played the key moments better at the R Premadasa Stadium on Saturday. 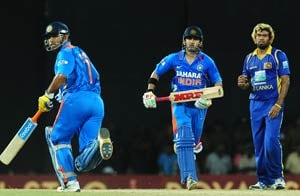 Until Suresh Raina exploded in a flurry of strokes, Sri Lanka, driven by experience and buoyed by youthful exuberance, seemed to have played the key moments better at the R Premadasa Stadium on Saturday.

India looked to have sold themselves short after losing three wickets for 29 between the 35th and 39th overs, and their way, in the batting Power Play, but the fire of Raina and the poise of Irfan Pathan steered them to a thrilling five-wicket victory and a 2-1 lead in the five-match One-Day International series. (Match in pics)

India started the match strongly despite Mahendra Singh Dhoni calling wrongly, and reduced Sri Lanka to 20 for three midway through the sixth over on the back of an inspired spell by Zaheer Khan. Sri Lanka were hauled back on track by the old firm of Kumar Sangakkara, who batted for most his 160-minute stint with a broken left little finger, and Mahela Jayawardene.

Their fourth-wicket stand of 121, the 30th time they had put on a century-plus partnership in international cricket, was the platform from which Angelo Mathews and Jeevan Mendis, playing his first match of the series, launched a spectacular assault. Riding on the pair's 104-run association in 73 deliveries, Sri Lanka powered to 286 for five.

No team had scored more than 271 to win at the Premadasa; India broke their own record and posted the biggest chase on Sri Lankan soil by reaching 288 for five with two deliveries to spare, as much due to Gautam Gambhir's 11th ODI century as the brilliant Raina-Pathan tandem that rescued a lost cause.

The two were united with 91 required off 69 deliveries. They took their time, but once Raina played himself in, he was pure magic. Pathan ticked the strike over, Raina smote the big blows and as Sri Lanka and their fans watched disbelievingly, turned a hopeless cause into a winning one by putting on 92 in just 67 deliveries.

Till Gambhir was marshalling the reply, India appeared well on course. Neither Virat Kohli nor Mahendra Singh Dhoni, who pushed himself up to No. 4, seemed to have the measure of the pitch, struggling for timing, but Gambhir batted with rare fluency and authority, building beautifully on his half-century in Hambantota three days back.

Through successive partnerships of 105 with Kohli and 67 with Dhoni, Gambhir had left India primed for a go at the target. When the batting Power Play began, India were 180 for two, needing 107 in 90 deliveries. Enter Lasith Malinga. First ball, he cleaned up Dhoni with a screaming yorker, next ball he won a marginal shout for leg before against Rohit Sharma with another pin-point toe-crusher. Two in two, and suddenly, the balance of power had emphatically shifted Sri Lanka's way.

Gambhir, all class as he rocked back and cut powerfully or leaned forward and stroked the ball through the covers, brought up a deserved century in front of a packed crowd - what a pleasant change from the sparse stands in Hambantota - but ran himself out to a direct hit from mid-on by Isuru Udana. With him seemed to have disappeared India's chances, but Raina and Pathan had other ideas.

The first half-hour of the Sri Lankan batting had been all about Zaheer and, to a lesser extent, Pathan. Making the most of early assistance by way of decent bounce and gentle swing, they rocked Sri Lanka but once Sangakkara and Jayawardene set stall, Sri Lanka recovered strongly.

Mathews and Mendis did provide the final thrust, but there is no gainsaying what course the innings would have taken had the senior pros not been involved in the innings-retrieving stand. It was a partnership remarkable for the ease and control with which they transferred the pressure on to India. Not a ball was hit in anger, no risk taken, yet the runs flowed through excellent placement and brilliant running.

It was a dramatic reversal in fortunes. Zaheer, easily the standout bowler despite bowling nine of his ten overs in the Power Plays, fired out Tillakaratne Dilshan with a delivery that bounced a little extra and made its way to the stumps off the batsman's forward prod, then ended Upul Tharanga's misery with a wide, swinging delivery that snaked its way to Dhoni off the outside edge.

Almost immediately afterwards, Pathan pinged Dinesh Chandimal in front with one that swung back in, raising visions of a stunning collapse.

As Zaheer and Pathan made way for Ashok Dinda and Rahul Sharma, Sangakkara and Jayawardene began to assert themselves. Their frenzied running drove India ragged and cracks began to appear in the fielding, yet again. Steadily, Sri Lanka moved into the ascendancy when, against the run of play, Rahul trapped Jayawardene in front with a fastish leg-break.

Sangakkara, pinged on his right hand as he missed a pull off Dinda, soldiered on, but the repeated breaks for treatment seemed to disrupt India's rhythm as much as that of Sangakkara, caught at point during the batting Power Play restrictions. Mathews and Mendis then exploded towards the closing stages.

India's early discipline deserted them as runs came in torrents. Dinda was guilty of bowling far too short, Pathan gave too much width and then overstepped when he found the outside edge of Mathews's bat, and Rahul's quicker pace allowed the batsmen to direct the ball into gaps. Where Sangakkara and Jayawardene had played risk-free cricket, Mathews and Mendis weren't unafraid to chance their arms, India leaking 97 in the last ten overs.