Alastair Cook made a patient century to give England the edge on the first day of the first Test match against South Africa at the Oval on Thursday. 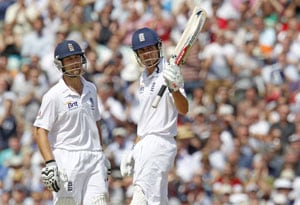 Alastair Cook made a patient century to give England the edge on the first day of the first Test match against South Africa at the Oval on Thursday.

Cook made 114 not out as England overcame the loss of captain Andrew Strauss in the first over to reach 267 for three at the close.

Cook shared a 170-run second wicket partnership with Jonathan Trott (71) and an 81-run third wicket stand with Kevin Pietersen, who made 42.

Cook and Trott came together without a run on the board after Strauss was leg before wicket to Morne Morkel off the fourth ball of the match.

But Cook and Trott were largely untroubled on a dry, easy-paced pitch as they rebuilt the England innings with sensible batting, only playing the ball when it was necessary or when they could pick off loose deliveries.

With the number one ranking in Test cricket at stake, it had been expected that the series would be a battle between two outstanding pace attacks but the South Africans were forced to settle for containment for much of the day.

The tourists used spin bowlers for 21 of the 90 overs sent down.

The left-handed Cook showed impeccable shot selection as he reached his 20th Test century off 222 balls, with 11 fours and a top-edged hook for six off Dale Steyn.

By the close he had faced another 61 deliveries without adding another boundary.

Trott faced 162 balls and hit nine fours, scoring a high percentage of his runs on the leg side, before he was caught behind when he edged a drive against Morkel, not getting fully forward one ball after getting a bouncer from Morkel.

Pietersen threatened to play a dominating innings until he gloved a hook against Jacques Kallis three balls before the second new ball was due.

It provided a second catch for AB de Villiers, who took over as wicketkeeper after the injury-enforced retirement of Mark Boucher.

The dismissal of Strauss justified South Africa's decision to give the new ball to Morkel instead of Steyn. It was the seventh time in nine matches that Strauss had fallen to the tall fast bowler.

With Morkel bowling around the wicket to the left-hander, Strauss was trapped on the crease by a ball angled in to him. Umpire Steve Davis turned down an appeal by the South Africans, who called for a review which showed the ball was hitting the inside of the leg stump.

Morkel finished the day as South Africa's most successful bowler, taking two for 44 in 18 overs.

Rain delayed the start by 15 minutes and the floodlights were turned on 25 minutes after the start as heavy cloud rolled in. But the weather cleared and most of the rest of the day's play was in sunlight.

Comments
Topics mentioned in this article
Cricket Alastair Cook Morne Morkel Dale Steyn Eoin Morgan Andrew Strauss England Cricket Team Michael Clarke Kevin Pietersen Vernon Philander Jonathan Trott RP Singh England vs India 2011
Get the latest updates on IND vs NZ 2021, check out the Schedule and Live Score . Like us on Facebook or follow us on Twitter for more sports updates. You can also download the NDTV Cricket app for Android or iOS.