Pakistan Cricket Board's acting chairman Najam Sethi said that Pakistan could ask for special security for its players in Bangladesh. 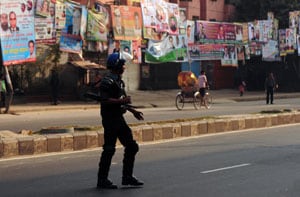 Pakistan Cricket Board's acting chairman Najam Sethi has conceded that the national team may have to pull out of the forthcoming Asia Cup and World Twenty20 in Bangladesh owing to security concerns.

Sethi told Geo News in Dubai, where Pakistan are playing Sri Lanka in an ODI series, that if the foreign office advised the PCB not to send the team to Bangladesh, the board would have to comply.

"We are keeping the foreign office informed about the situation and there could be different scenarios in the near future for our team," he said.

Sethi said that Pakistan could ask for special security for its players in Bangladesh, else they would not be able to send the national side.

Protests have been continuing in Bangladesh against a resolution passed in the Pakistan national assembly over the execution of a Jamaat-e-Islami leader. The protesters have been calling on the government to end diplomatic ties with Pakistan.

The ICC executive board is due to meet in Dubai on January 25 and the ACC council will also meet next month to discuss the situation in Bangladesh where the trials of the 1971 war criminals have led to rising tensions between Pakistan and Bangladesh.

Sethi said the PCB had also been in touch with the ICC over the security situation in Bangladesh. According to reports, Sri Lanka, South Africa and India are being considered as alternate venues in case the ICC is forced to move the World T20 from Bangladesh while a PCB official said that the Asia Cup could be postponed for an indefinite period.