Nepal qualified for the World T20 which will be held in Bangladesh from Match 16 to April 6 2014. This was the players' first public appearance since they surprised everybody by clinching a spot in the tournament. 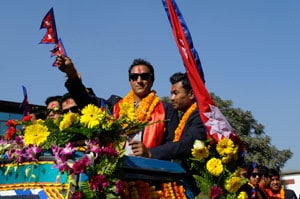 Hundreds of cricket fans packed the streets of Nepal's capital Kathmandu on Wednesday, hailing the Himalayan nation's newest heroes at a victory rally after their shock qualification for the Twenty20 World Cup finals.

Dressed in navy blue jackets, the players boarded an open-topped bus covered with marigold garlands, waving to fans at their first public appearance since their return home from Abu Dhabi where they clinched qualification last week. (Nepal, UAE qualify for World T20)

"I bunked school today to participate in the victory rally. So you can imagine how happy I am," Chiran Panday, a gleeful ninth-grader, told AFP as he waved a small national flag.

Fans danced to traditional music and smeared holy vermilion powder on the cricketers' faces to express their joy at the team's feat last Thursday, when they qualified for the finals of a major cricket tournament for the first time.

Nepal only began fielding a national side in 1996 and football remains the most popular sport, despite the country's proximity to cricket-mad India.

The central government has already promised to award each of the 15 team members one million Nepali rupees ($9,976).

Electronics engineer Binod Kunwar told AFP he came out to support the team because, "I realised how cricket can unite people together."

The victory brought a rare burst of good news to the country, which remains in the throes of a political crisis seven years after the end of a civil war.

The Twenty20 World Cup is due to take place in Bangladesh between March 16 and April 6 next year.

Comments
Topics mentioned in this article
Cricket FIFA Virender Sehwag Gary Kirsten Aftab Alam ICC World Twenty20 2014
Get the latest updates on IND vs NZ 2021, check out the Schedule and Live Score . Like us on Facebook or follow us on Twitter for more sports updates. You can also download the NDTV Cricket app for Android or iOS.