Former Pakistan wicketkeeper Moin Khan is believed to take over as head coach for a short period after Dav Whatmore's contract expires in February. 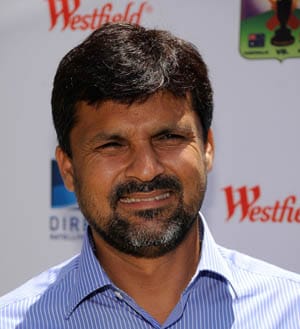 Former Pakistan captain Moin Khan is likely to take over as the head coach of the national cricket team for a short period after Australian Dav Whatmore's contract ends in February. A reliable and well placed source in the Pakistan Cricket Board (PCB) told PTI that while former coach Waqar Younis was a strong candidate to be appointed as head coach on a long term basis but it would be Moin who will be taking over as the coach for the Asia Cup and World Twenty20 in Bangladesh next year in February and March after Whatmore leaves.

"Whatmore will definitely leave after his two-year contract ends but since there is shortage of time for the board to make a long term appointment of the head coach it will be Moin who will be asked to take over the coaching duties on short-term basis," the source said.

"Moin is a prime candidate since he has been manager of the team for a while now and is also on the popular list of the PCB acting Chairman, Najam Sethi.

"But Moin is averse to a long term role because of his personal and business commitments," the source added.

He, however, made it clear that Sethi intended to hold discussions with Waqar in the UAE since both of them were present there.

"Waqar is there commentating on the ongoing Pakistan and Sri Lanka series while Sethi has gone there on a visit and there are plans he will talk to Waqar about a long term coaching assignment," the source said.

"Waqar will be the top candidate when the board finally appoints a long term coach at least for two years and the former fast bowler himself has indicated he is interested in coaching the Pakistan team once again."

Waqar was head coach of the team in 2010 and 2011 before he left for personal reasons in September 2011. Since then the Pakistan had two coaches, Mohsin Khan, who worked on interim basis, followed by Whatmore.

The source said the board remained undecided about having a batting coach but Moin had suggested the name of former captain Inzamam-ul-Haq. "The board will carry out a proper scrutiny process to appoint a long term coach from next year."

The PCB has also told its selectors to start preparing a list of 20 to 25 players who will be given new central contracts for 2014 early next year. "Moin is also being consulted in this process," the source said.

Comments
Topics mentioned in this article
Cricket Mohammad Asif Zulqarnain Haider Moin Khan Waqar Younis Stuart Broad Zaheer Abbas Davenell Frederick Whatmore ICC World Twenty20 2014
Get the latest updates on IPL 2020, check out the IPL Schedule for 2020 and Indian Premier League (IPL) Cricket live score . Like us on Facebook or follow us on Twitter for more sports updates. You can also download the NDTV Cricket app for Android or iOS.