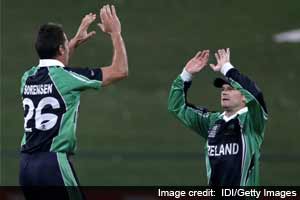 Ireland set up a third successive final date with Afghanistan in the ICC World Twenty20 Qualifier after defeating hosts the United Arab Emirates (UAE) by 62 runs in the second semi-final at Zayed Cricket Stadium in Abu Dhabi on Friday.

The defending champions overcame the loss of three wickets inside six overs to post a post a respectable 147 for eight, before Max Sorensen and Tim Murtagh shared eight wickets equally between them, conceding 15 and 24 runs respectively, to bowl the UAE out for 85 runs with 2.2 overs to spare.

In the first semi-final earlier on Friday, Samiullah Shenwari claimed three wickets for 19 runs and scored 24 not out as Afghanistan defeated Nepal by eight wickets.

Shenwari then scored an unbeaten 24 as Afghanistan raced to 96-3 off 14.2 overs.

Comments
Topics mentioned in this article
Cricket Tim Murtagh Sreesanth ICC World Twenty20 2014 Max Sorensen Ireland Cricket Team Afghanistan
Get the latest updates on ICC T20 Worldcup 2022, check out the Schedule and Live Score. Like us on Facebook or follow us on Twitter for more sports updates. You can also download the NDTV Cricket app for Android or iOS.