Mahendra Singh Dhoni blamed batting failure and untimely brief spell of rain for India's rout against Australia as the team suffered a crushing nine-wicket defeat in a Super Eight group match of the World Twenty20, here on Friday. 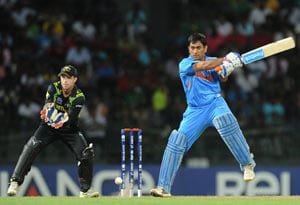 Mahendra Singh Dhoni blamed batting failure and untimely brief spell of rain for India's rout against Australia as the team suffered a crushing nine-wicket defeat in a Super Eight group match of the World Twenty20, here on Friday.

Just when Australia had began their chase, rain stopped play for about 10 minutes and India skipper said that it made conditions difficult for his spinners.

"We need to analyse what really happened. We got off to a good start, but lost quick wickets, and we were not in a good situation to cash in. That was the main reason for the defeat We were 20 short," Dhoni said at the post-match presentation ceremony.

"Rain came just at the wrong time. Just after the wicket was rolled. The wet ball is not good for spinners. It just reminded me of the England series, where nothing worked for spinners. That was the main reason we lost. No spinner told me the ball did not slip out of my hands," Dhoni added.

Dhoni praised Australian openers Shane Watson and David Warner for their superb batting but admitted that they squandered a good start.

"We need to give them credit for the way they batted, but the ball was not stopping as it did in the first innings. We should have got bit more total. 70 runs after 10 overs was a good start," he said.

Dhoni said they would like to forget the comprehensive defeat and "move forward".

"It's important to look at what mistakes what we have committed as a team, but it is also important to get it out of the system, not think about it much. we will try to do that, but it will still be there, in some corner of our heart," he said.

"It was impressive performance. Set up by some good bowling. Patty was outstanding, the best we have seen him bowl in this tournament so far," Bailey said.

Australia were given ninth rank at the start of the tournament but Bailey said their performance was proof that it does not matter match if players play well.

"The absolute beauty of those two openers is, that when they are on, there are no better hitters. I don't think rankings matter when you get to the World Cup. As good as this win is, we have to be up and ready for South Africa," he said.

Watson is in red-hot form and he extended it today with three wickets and a blistering 72-run knock. He was adjudged Man-of-the-match for the third consecutive match of his side.

"The last couple of games have been pretty good. It's nice when things come together like this. Probably batting is a bit more enjoyable, when it is two of you against 11 of the opposition. That's probably more satisfying, but enjoying being an all-rounder," Watson said.