WTC Final: Team India is hard at work to get acclimatised to English conditions ahead of the World Test Championship final against New Zealand. 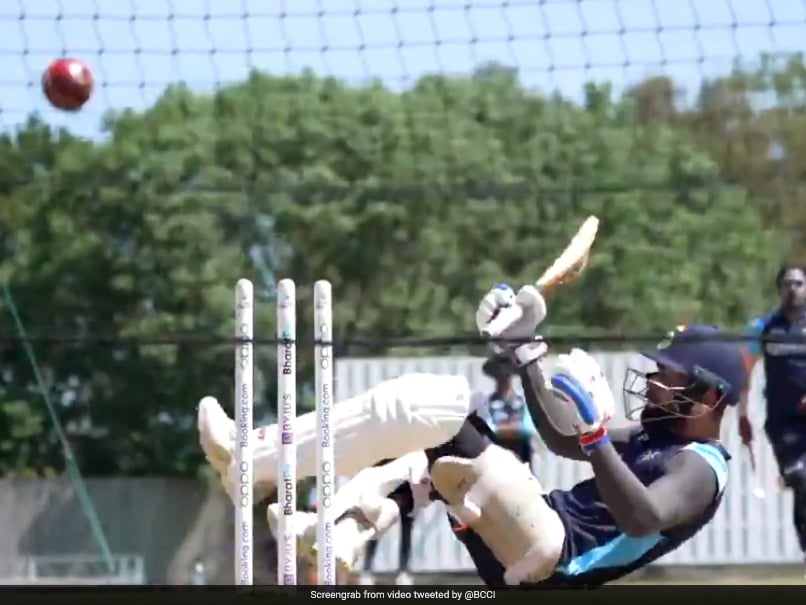 Virat Kohli took a tumble while trying to evade a short ball during a net session.© Twitter

India's preparations for the World Test Championship (WTC) final are in full swing. The players have been hard at work, gearing up for WTC final against New Zealand, with an intra-squad match and multiple net sessions. The Board of Control for Cricket in India (BCCI) has been keeping fans updated with regular videos of training sessions and recaps of the intra-squad game. On Tuesday, the cricket board shared another snippet from Team India's net session where the likes of skipper Virat Kohli, Rishabh Pant and Ajinkya Rahane among others were seen sweating it out.

Kohli looked in fine touch, nailing his trademark cover drives but had a nervy moment and took a tumble while evading a short ball.

Rishabh Pant too looked at his free-flowing best, playing a big shot against Ravindra Jadeja and then showing his defence against quicks likes Mohammed Shami and Ishant Sharma.

Here is the entire video:

Three sleeps away from the BIG GAME.

India reached England on June 3 and straightaway made their way to The Ageas Bowl in Southampton, the hosts of the WTC final. The players completed a mandatory 3-day isolation period before getting down to business.

New Zealand, on the other hand, have been in England from May 17 after flying from Auckland via Singapore, and then playing a two-Test series against the hosts that finished on June 13.

The Kiwis come into the WTC final full of confidence having thrashed England by eight wickets with more than a day to spare in the second Test at Edgbaston to seal the series 1-0.

This was just New Zealand's third win in 18 Test series in England and their first this century after triumphs in 1986 and 1999.

Rishabh Pant World Test Championship 2021 Cricket
Get the latest updates on ICC Women's Cricket World Cup 2022 and IPL 2022, check out the Schedule , Live Score and IPL Points Table. Like us on Facebook or follow us on Twitter for more sports updates. You can also download the NDTV Cricket app for Android or iOS.