India wicket-keeper batsman, Dinesh Karthik has shared a snap with legendary batsman Sunil Gavaskar from Belgrade ahead of his commentary duties in the WTC final and 'The Hundred'. 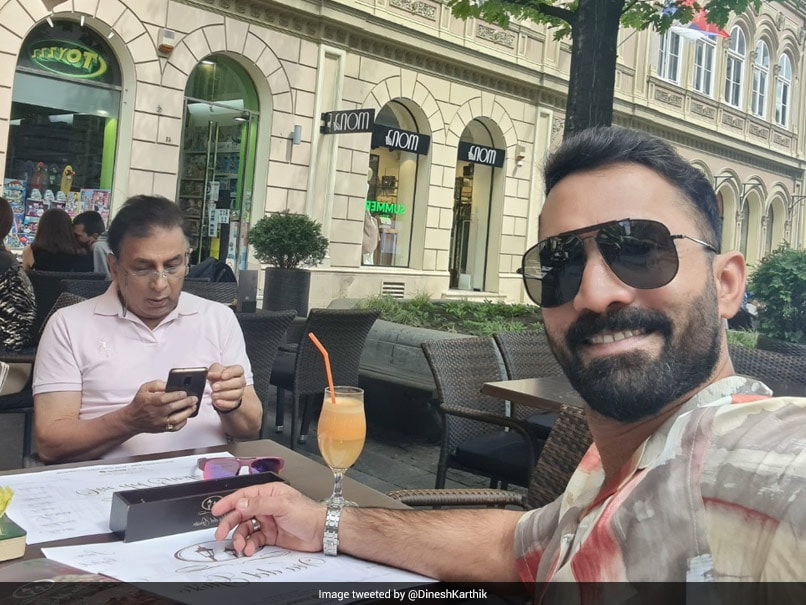 Indian wicket-keeper batsman Dinesh Karthik is currently in Belgrade, on his way for commentary duties in the World Test Championship final and 'The Hundred' tournament. Karthik shared a picture on his Twitter handle with the legendary Indian batsman Sunil Gavaskar, captioning "Lunch date with the legend!" While the post is two days old,Kolkata Knight Riders re-posted it on Thursday. The official broadcasters of England and Wales Cricket Board (ECB) have signed up Karthik for commentary duties in their pet project 'The Hundred'. The inaugural edition of the tournament will be played from July 22 to August 21. Before trying his hands in the 'The Hundred', Karthik is set to be part of the commentary panel during the historic first final of the World Test Championship that will be played between India and New Zealand from June 18-22 at Southampton.

The wicket-keeper batsman has come out of isolation in the Serbian capital of Belgrade along with Sunil Gavaskar. Now they will head to Southampton for their duties in the WTC Finals.

Earlier, he was also part of the commentary team during India's home white-ball series against England but, he did that from home and, this time he will do it from the ground.

After 'The Hundred' tournament, the 34-years-old will head to the United Arab Emirates for his field duties in the second phase of the Indian Premier League starting September 19.

He racked up 123 runs at an average of 30.75 in seven games he played in the first phase of the IPL 2021. KKR lost five out of their first seven games and in order to qualify and keep the faith in their hand the team has to win six of the next seven games.

Sunil Gavaskar World Test Championship 2021 Cricket
Get the latest updates on India vs South Africa and check out  Schedule, Results and Live Score. Like us on Facebook or follow us on Twitter for more sports updates. You can also download the NDTV Cricket app for Android or iOS.