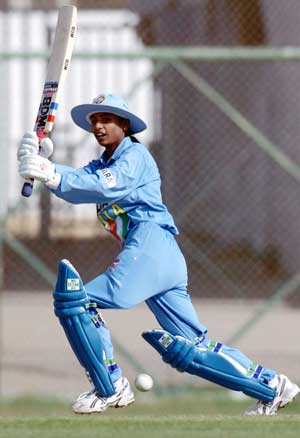 Raj, who is appearing in her fourth successive women's World Cup, will lead her side in the opening match of the tournament on January 31 at the Brabourne Stadium in a Group A tie against the West Indies.

Other teams in Group A include defending champions England and Sri Lanka. Group B contains Australia, New Zealand, South Africa and Pakistan.

The tournament is scheduled to be held from January 31 to February 17 in Mumbai and Cuttack.

The England duo of Sarah Taylor and Lydia GreenwayÂ  are third and fourth respectively, while New Zealand's Amy Satterthwaite is in fifth spot completes the top five.

The fight for the top slot in the Player Rankings for ODI bowlers is even more interesting. England's Katherine Brunt currently heads the table with 777 ratings points. But Brunt will face a tough challenge from Australia's Lisa Sthalekar, who is currently second with 764 ratings points.

India's Jhulan Goswami at third, Ellyse Perry of Australia in fourth and England's Laura Marsh in fifth are the other bowlers in the top 10 who are likely to make improvements.

Taylor is currently the clear leader in the Player Rankings for ODI all-rounders' with 453 ratings points, followed by Lisa Sthalekar in second place and New Zealand's Nicola Browne in third.

Comments
Topics mentioned in this article
Cricket Katherine Helen Brunt Mithali Raj Stafanie Roxann Taylor ICC Womens World Cup 2013
Get the latest updates on IPL 2020, check out the IPL Schedule for 2020 and Indian Premier League (IPL) Cricket live score . Like us on Facebook or follow us on Twitter for more sports updates. You can also download the NDTV Cricket app for Android or iOS.