Mithali was unlucky not to score her eighth consecutive half-century in ODIs missing by a mere four runs. 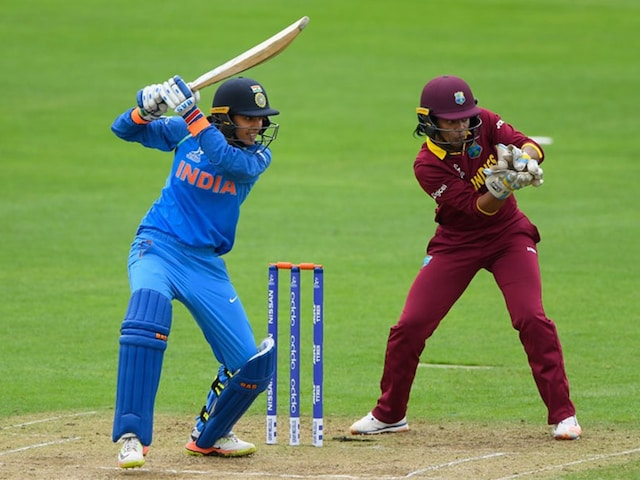 Opener Smriti Mandhana made amends for missing out on a hundred against England with a scintillating unbeaten 106 guiding India to a comfortable seven -wicket victory against West Indies in the ICC Women's World Cup, on Thursday. Chasing a modest target of 184, Indian eves won with as many as 45 balls to spare, courtesy another superlative performance from the left-handed opener Mandhana. After her match-winning 90 against hosts England, Mandhana started from where she had left the other day, hitting 13 fours and two sixes -- both pull shots.

Along with the ever-dependable skipper Mithali Raj (46), Mandhana added 108 runs for the third wicket virtually shutting the World T20 champions out of contest.

Mithali was unlucky not to score her eighth consecutive half-century in ODIs missing by a mere four runs. She would rue the chance as a loopy full toss from off-break bowler Hayley Mathews was hit straight to Afy Fletcher at mid-off.

But young Mandhana did not let the second chance go abegging, hitting some delightful strokes all-round the park.

When Shanilia Connell dug one short, she rocked to the backfoot pulling it over mid-wicket. She repeatedly found the gaps on the off-side and also hit some glorious shots on the on-side.

India could have been in a spot of bother at 33 for 2 but with a seasoned campaigner like Mithali at the other end, Mandhana went for her shots without much pressure.

The century -- her 2nd in ODIs, came when she charged down the track to loft Stafanie Taylor inside out. The hundred off only 105 balls.

Fittingly, she finished the match with her 13th boundary to get a deserving second 'Player of the Match' award.

"I was quite nervous after 90 but my partner Mona told me not to play a rash shot. This knock is special because we were chasing and my first hundred came in a losing cause (against Australia). Also this comes in a World Cup game," Mandhana said after the match.

Skipper Mithali was also pleased with Mandhana's effort as well as effort from the spinners.

"Very pleased with the way the girls responded with crucial runouts even though there were couple of lapses in th field (drops). A very good knock from Mandhana. I was hoping the seamers would utilise the conditions after we chose to bowl. But maybe it wasn't their day and the spinners did exceptionally well to bring us back," the Indian skipper said.

Earlier, India's spin troika of left-arm spinners Poonam Yadav and Deepti Sharma, and off-spinner Harmanpreet Kaur restricted the West Indies to a lowly 183 for 8 in 50 overs.

Mithali Raj opted to field and West Indies were comfortably placed at 69 for one in the 19th over before things fell apart and the current World T20 champions were tottering at 91 for 6.

First humbled the hosts and now thumped the Windies. Mithali's Raj continues. May you go all the way, girls. #WWC17 @BCCIWomen

Shanel Daley (33) and Afy Fletcher (36) showed some defiance down the order taking the score to plus 180, which at one point in time was looking improbable.

Apart from the trio, the other impressive performer was another left-arm spinner Ekta Bisht (1/23 in 10 overs).

The normally economical Jhulan Goswami (0/37 in 6 overs) went for runs as Mathews hit seven boundaries during her 57-ball knock.

However between overs 20 and 35, West Indies innings went haywire at the County ground -- a venue which was ruled by Sir Vivian Richards during his days for Somerset in county cricket.

The Caribbean batters found it difficult to hit leg-break bowler Poonam and the tight wicket to wicket bowling from Deepti and Ekta. Harmanpreet went for some runs but got crucial breakthroughs.

If West Indies managed to cross 180, it was due to Fletcher and her 37-run stand with Anisa Mohammed (11).

For the record, Harmanpreet Kaur had sustained a finger dislocation but it is still not clear whether she will have to miss matches or not.

Comments
Topics mentioned in this article
India Women West Indies Women Mithali Raj Cricket ICC Women's World Cup
Get the latest Cricket news, check out the India cricket schedule, Cricket live score . Like us on Facebook or follow us on Twitter for more sports updates. You can also download the NDTV Cricket app for Android or iOS.